Hot Manyata Dutt Photos from Italy and France Show She is Quite the Stylish Traveler!

Manyata Dutt took a holiday across Italy and France recently and posted some stunning bikini photos on Instagram. Looking at her travel diaries, we cannot help but notice how Sanjay Dutt's wife Maanyata is one of the most stylish travelers on the block. These hot Maanyata Dutt photos from her vacations show not only her love for travel, but also her eye-catching style! 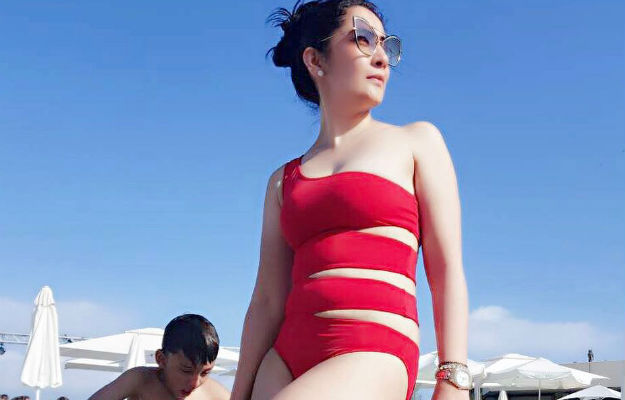 Manyata Dutt (or Maanayata Dutt as her Instagram account states) is a woman who needs no introduction. Being married to one of the most popular actors in the country, Maanyata is now a popular page 3 celebrity. The former actress also functions as the current C.E.O of Sanjay Dutt Productions. While hubby Sanjay Dutt is often in the news for his shoots and upcoming projects, Maanyata has been making some waves of her own. Her Instagram account boasts of some stunning travel diaries with Maanyata doing touristy things at some of the most exotic locales. (ALSO SEE When a south Mumbai restaurant offered free chicken on Sanjay Dutt’s release from prison!) What caught our eye though is how stylish Maanyata is as a traveler. She knows how to rock the bikini avatar as well as she does the casual jeans and t-shirt look. These hot Manyata Dutt photos from her European vacation will not only spark your wanderlust but also get you in awe of Maanyata’s chic style and vibrant personality. Also Read - Sanjay Dutt's wife, Manyata Dutt Looks Ravishing in a Green Saree And Backless Blouse at Arpita Khan's Ganpati Puja; See Latest Pics

And that’s her posing with pigeons in Milan

And that’s her behaving all Roman in Rome!

That’s Maanyata looking gorgeous as ever in Venice!

And that’s Maanyata turning up the heat in Monaco with her bikini avatar!

Chilling by the beach!

We leave you with this pic of Maanyata going ‘geruha’ in Cannes!

Doesn’t Maanyata Dutt just look too gorgeous wherever she goes? It is clear that she loves to travel the world and look her very best when she is on vacation. Her hot Instagram photos prove that Maanyata might be one of the most stylish travelers in the Bollywood circuit! We wonder how stylish Sanjay Dutt looks when he travels! NOW SEE Restaurants in Mumbai where you can spot Bollywood celebrities