International Beer Day 2017: An Ode to The Delirium Cafe in Brussels that Sells Over 2,400 Types of Beer

August 4, 2017 is International Beer Day, and what better way to mark the occasion than to head to the Belgian bar that offers the largest range of beers in the world. Here is an ode to the bar and its many beers. A wise old space wizard once talked about a cosmic energy that surrounds us, penetrates us and binds the galaxy together. We think he was talking about beer, and it is hard to argue against that. From the Apong in Assam to the Altbier in Düsseldorf, beer brings everyone together(probably drunk). With International Beer Day 2017 on 4th August, let’s look at the one beer bar where we would all like to celebrate the day: Delirium Café in Brussels, Belgium.Also Read - Belgium vs France Live Streaming UEFA Nations League Semi-Final in India: When And Where to Watch BEL vs FRA Live Stream Football Match Online on SonyLIV, JIOTV; TV Telecast on Sony Ten

Delirium Café lies a few hundred meters from the Grand Place central square of Brussels, across the street from the famous Jeanneke Pis fountain. Its claim to fame comes from its pink elephant logo and its beer menu, which is massive to say the least. Delirium offers more than 2,400 types of beer spanning 78 countries. Its name and logo comes from the Delirium Tremens ale, the flagship beer of the legendary Huyghe Brewery, which has been in operation since 1654. Since it opened in a small alleyway in Brussels, Delirium Café has opened franchises in Japan, Warsaw, Lisbon, Sao Paulo and Rio de Janeiro, with another planned in the US. But the original Belgium bar remains the most popular. Also Read - Denmark vs Belgium Live Streaming Euro 2020: When And Where to Watch DEN vs BEL Live Stream Football Match Online and on TV 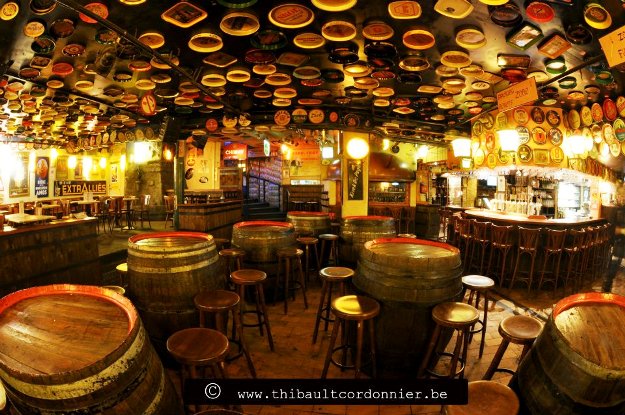 Inside the Delirium Cafe

While the history behind this little cafe is pretty fascinating and the fountain depicting a little girl pissing definitely turns heads, the show-stealer is the around 240-page beer menu at the Delirium Café. Stretching three floors, the place is also called the Delirium Tremens Pub. The ground floor has around 20 draft beers on offer and liter masts of strong beer, with the dark Delirium Nocturnum and lighter Delirium Tremens being favorites. ALSO READ: 13 popular munchies in India which you should order along with your booze!
Also Read - BEL vs RUS Dream11 Team Prediction, EURO 2020 Group B Match: Fantasy Football Tips & Playing 11 Updates for Today’s Euro 2020 Match at Gazprom Arena, Saturday 12th June, 12:30 PM IST

The rest of the beer range can be found at the cellar bar, where you can sit down in the afternoon to choose your beers from the long list. Some say that not all the 2,400 types are in stock all the time, but most of them are. The newest part of the bar is its third floor, where you can find 100 different types of beer. Owner Joel Pecheur estimates that around 2,000 beers are just from Belgium, with around 500 types from other parts of the world. When the bar entered the Guinness World Records for the largest selection of beer in the world, it had 2,004.

You will find famous beer brands like the Irish Guinness of course, but you should probably be trying the finer and rare types of beer, like the Hinano from Tahiti or the Foraya Portari from Faroe Islands. So head to the Belgian bar to sip on some of the world’s most exotic amber brews. If you cannot, you still have some great breweries to check out in Mumbai, Pune, Delhi and Bangalore.