After the Jet Airways flight veered off this morning, the runway at Dabolim is now operational and accepting flights throughout the day.

A Jet Airways flight from Goa to Mumbai veered off the runway at the Dabolim airport early this morning. The Jet Airways flight was carrying more than 150 passengers when the accident took place. While no serious injuries were reported, as many as 15 passengers were hurt when they jumped using the inflated escape chutes. Jet Airways released an official statement saying that its Goa-Mumbai flight (9W 2374) carrying 154 passengers and seven crew members veered off the runway while aligning for take-off at 4.30 am. The flight had arrived from Dubai and was about to take off for Mumbai. “Few guests have sustained minor injuries during the evacuation process and medical assistance is being coordinated by the Jet Airways team and the airport authorities,” it said. (ALSO SEE 10 airline secrets air-hostesses dont ever tell you!) Also Read - India-China Ladakh Standoff: 'Situation Stable And Controllable, All Channels Open For Talks,' Says Beijing

News agency ANI posted these visuals of the flight and passengers: Also Read - Style Tips to Wear Mom Jeans: How to Look Cool Wearing 'Unhip' Denim at Any Occasion 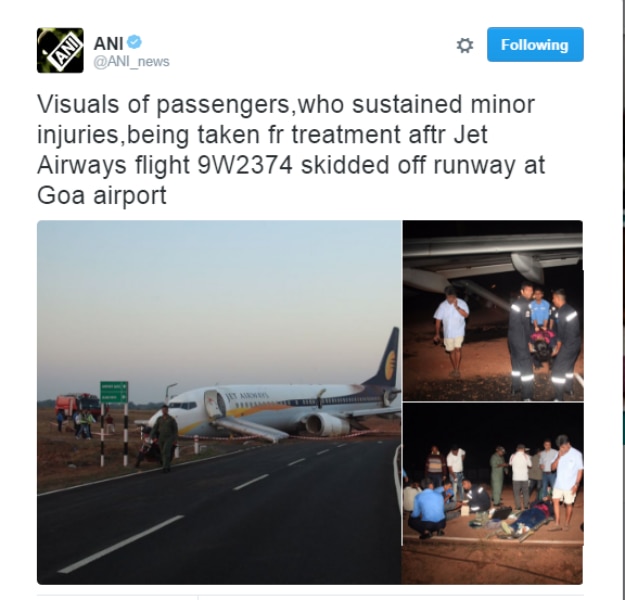 An eyewitness recounted that the aircraft tilted forward during the evacuation process causing panic among passengers. Those injured were taken to the Chicalim cottage hospital in Vasco for treatment. On account of the accident, Goa airport was to remain shut till 12.30 pm. However, the airport sources later announced that the runway was opened and made operational by INS Hansa. (DO SEE 7 times Bollywood actresses glammed up as air-hostesses!)

An Indian Navy spokesperson said a couple of hours ago that the runway has now been opened and ops flights will be accepted throughout the day to make up for the backlog and time lost. Jet airways posted this updated just about an hour ago:

14 spectacular photos from an air hostess travel diaries that will make you hate your job!