Maggie McMuffin was barred from boarding the plane as her outfit was deemed inappropriate. 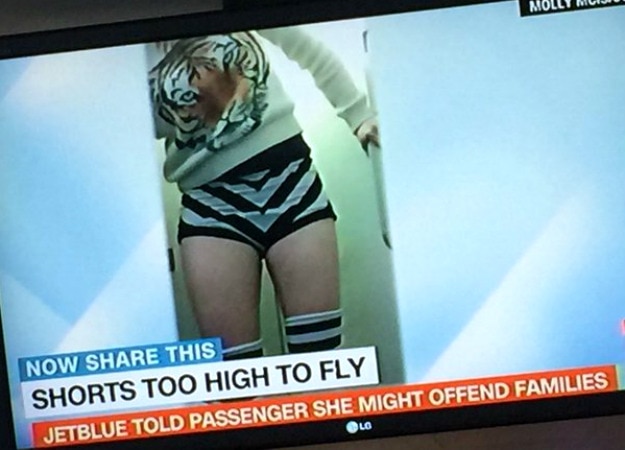 If you thought  India was stuck in the Stone Age when, welcome to the USA where a woman was forced to change her shorts after JetBlue Airline crew member told her that here outfit was inappropriate and she was not fit to fly in shorts. Also Read - Reel Life Ram Arun Govil Watches Ramayan Along With His Grandchildren, Picture Goes Viral

Coverage coverage: Look @MaggieMcMuff! Your shorts, indecent for plane, were ok to broadcast on TVs at the airport. pic.twitter.com/QV0rbi8Yv8 Also Read - BWF Freezes Rankings Amid Coronavirus Outbreak, Standings Backdated to March 17 to be Basis For Entry in Future Events

The incident took place on May 18, when Maggie McMuffin, a burlesque dancer, was returning to Seattle after her performance in Boston.  According ABC News, Maggie was informed by a crew member that her outfit- thigh-high tights, shorts and sweater — was not appropriate and she needs to change before boarding the plane as it ‘may offend other families’ on the flight. She was told that the matter was discussed by crew members and the pilot took the decision that she needs to change into to something else or she will be barred from entering the plane.

@fuckityfuckity Yes. I was told to rebook or find something else so I bought and put on these. pic.twitter.com/RgdIkjApTD

According to Fox News, Maggie offered to cover up with a plane blanket or tie the sweater around her waist as she was not carrying anything else. However, the crew member suggested her to buy new bottoms at an airport store. She bought pajama bottoms for $22 and eventually she was allowed to board the plane. The burlesque dancer said that she felt disrespected and accused the airline of slut shaming.

ALSO SEE SpiceJet will now book you on a new flight if you miss one!

IndiGo aircraft mistook a road in Jaipur for a runway!

She was wearing the same outfit during the first leg of her flight, which was also on JetBlue, to Boston from New York. After the incident, the airline apologized to Maggie and offered a credit of $162 for a future flight. The airline also refunded for the pyjama. But is it enough?