Jodhpur forts and monuments that represent its historical legacy

Much of Rajasthan's incredible history and architecture has been encapsulated in Jodhpur's forts and museums.

With the harsh sands of the Thar Desert around it, the Sun City of Jodhpur is probably what you picture in your mind when you think of Rajasthan. Narrow, ancient lanes and streets, colorful dress and handicraft, and forts and monuments that talk of a time long gone; these are the elements that define the city. Lying almost square in the geographic centre of the state, Jodhpur is also the cultural nucleus of Rajasthan. It was the capital of the Marwar kingdom for centuries, and has been occupied by other great dynasties, including the Mughal Empire. Jodhpur’s forts and monuments stand today, seemingly untouched by the ravages of time, as a symbol and sometimes scar of the times long gone. If you visit this popular tourist destination in Rajasthan, you do not want to miss visiting these popular Jodhpur forts and monuments. ALSO READ: 6 best things to do in Jodhpur Also Read - Centre Mulls Extending Nationwide Lockdown as COVID-19 Cases Near 5000-mark With 124 Deaths | Top Developments 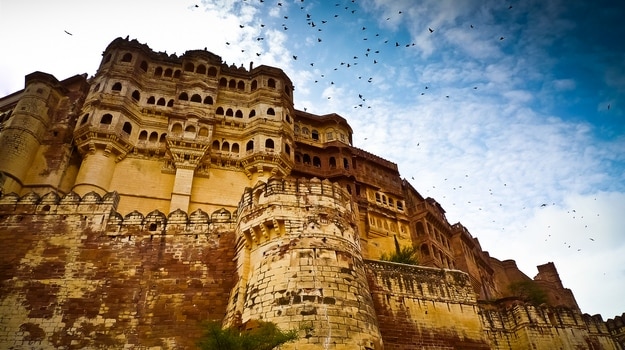 Towering above the hill on which stands, the massive Mehrangarh Fort overlooks the blue houses of the old city is a remarkable symbol of Indian architecture. It is imposing to say the least, with its burnished red sandstone walls rising hundreds of feet above the city that it guards. Rudyard Kipling famously called this fort the “work of giants”, and at first sight you would realise why he said that. Mehrangarh Fort easily dominates the skyline of the city and the desert itself, and it is worth visiting several times over. The fort has one of the most impressive museums in India, with a lot of memorabilia stored and displayed from the days of royalty. It also has several palaces and monuments within its walls, some of which are mentioned in this list. Also Read - Coronavirus in Gujarat: 14-month-old Toddler Dies of COVID-19 in Jamnagar 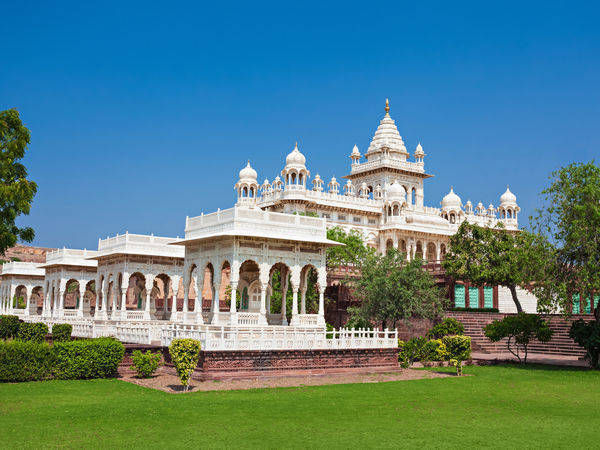 Built in 1899, Jaswant Thada is a stunningly intricate memorial made of white marble to commemorate the Marwar royal family. It was built by Maharaja Sardar Singh as an empty tomb to honor the memory of Maharaja Jaswant Singh II, his father and a ruler whose reign was marked by major reforms and prosperity in the kingdom. The memorial later became the cremation ground for the Marwar family. The beautifully carved white marble sheets used here are so thin that they glow warming in the bright desert sun. Jaswant Thada is decorated with several gazebos and portraits of Jodhpur’s rulers. It also includes a small lake and a garden, making for the perfect setting away from the hustle of the city. Also Read - New York Leads Coronavirus Death Toll With 731 Fatalties in 24 Hours 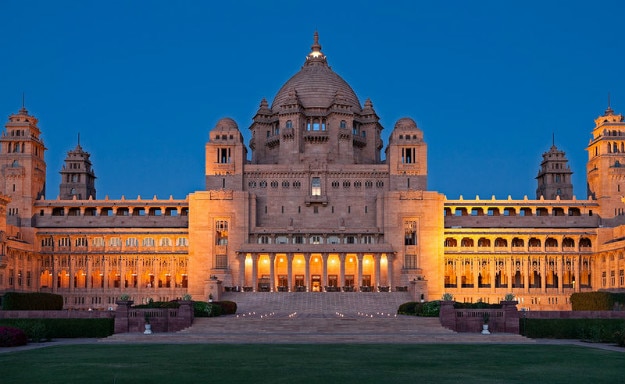 The immense and impressive Umaid Bhawan Palace lies in the middle of 26 acres of land, complete with impeccably maintained gardens. It still houses the Jodhpur royal family, making it one of the biggest private residences worldwide. Part of the palace is a hotel managed by the Taj Group, though, allowing us plebeians to experience a bit of the royal life for a short while. Built over the years from 1928 to 1943, Umaid Bhawan is extensively filled with renaissance and art deco design and lies around 15 minutes away from Jodhpur, along with popular attractions like the Jaswant Thada and Mehrangarh Fort. But this is an attraction in itself, reminding of the opulence of the kingdoms of the past. ALSO READ: 7 awesome pictures that prove Umaid Bhawan Palace is indeed the worlds best hotel

The favoured haunt of famed ruler Maharaja Jaswant Singh II, the Rai ka Baag Palace was ordered to be built by his mother, Queen Hadiji, in 1663. However, it is more famous in some circles for being the place where Swami Dayanand Saraswati, founder of the Arya Samaj reform movement in the 19th century, gave his sermons. In fact, it is said that the king himself would listen to the sermons of the iconic Hindu leader from his palace. Today, the Rai ka Baag Palace serves a more humble purpose, housing the offices of the income tax department. It lies close to a railway station of the same name and approximately 2 km away from the main Jodhpur Junction railway station itself.

Built in the 15th century, the Phalodi Fort is an excellent example of the incredibly detailed architecture and artistry of the Marwar era. Though less maintained than other major forts and monuments in Jodhpur, Phalodi Fort is a worthy visit for its imposing edifice alone, built by Rao Hammir Narawat in 1488. It is surrounded by the small ‘salt city’ of Phalodi, which was an important town in the 18th century for its salt industry. The town has several other picturesque spots, like the Shri Parashnath temple, Dadha Heritage Museum and Dadha Haveli. With all these sights to see, Phalodi Fort and its surround town makes for an interesting one-day trip. 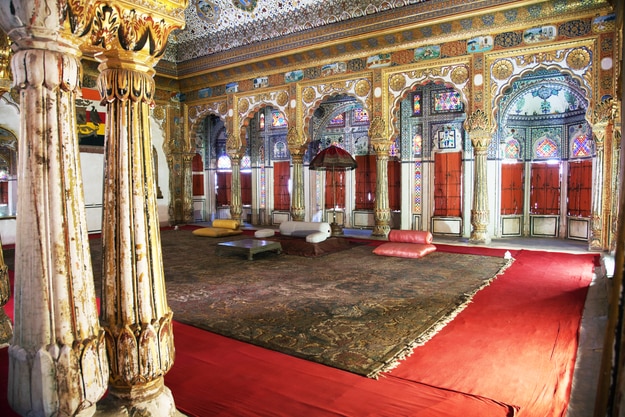 It’s name translates to ‘Flower Palace’, and it was built as the pleasure room for the female dancers of the Marwar kingdom. That should give you an idea of the opulent beauty awaiting you at the Phool Mahal. This is one of the most popular halls in the sprawling Mehrangarh Fort, giving a window into the extravagance of the royal days with gold filigree sourced from the plunder of Gujarat after the defeat of Mughal governor Sarbuland Khan. It also includes the Rag Mala paintings as well as royal portraits and paintings. Phool Mahal was built by Maharaj Abhaya Singh to emulate the beauty of a flower, and it’s pretty clear that he was successful in achieving the effect. The palace lies near Kishangarh city, along the Kishangarh/Jaipur highway. 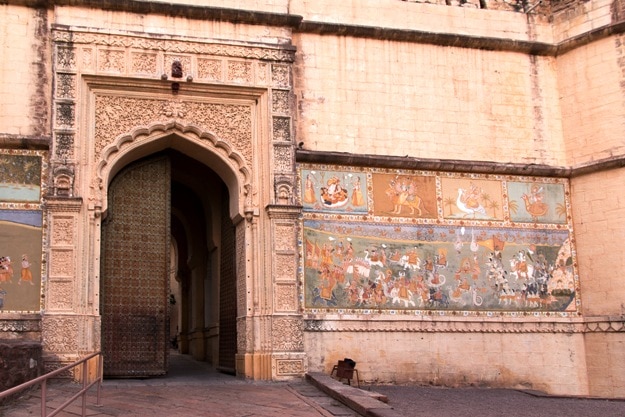 This one is not as expansive as the other entries in this list, but it still makes the cut for its historical significance. The Jai Pol is one of the seven gates to enter Mehrangarh Fort and one of its most popular entry points. Built in the style of traditional Rajasthani architecture in 1806, the imposing Jai Pol commemorates the victory of Maharaja Man Singh, the ruler of Amber and general to Mughal emperor Akbar, over the armies of Bikaner, Udaipur and Jaipur. The victory memorial takes you into the Mehrangarh Fort citadel, and still contains impact scars of cannon balls fired by invading armies. If you are entering Mehrangarh Fort, take a while to stop and admire the ‘Victory Gateway’ and its murals. ALSO READ: 5 specialties of Jodhpur which every foodie must try 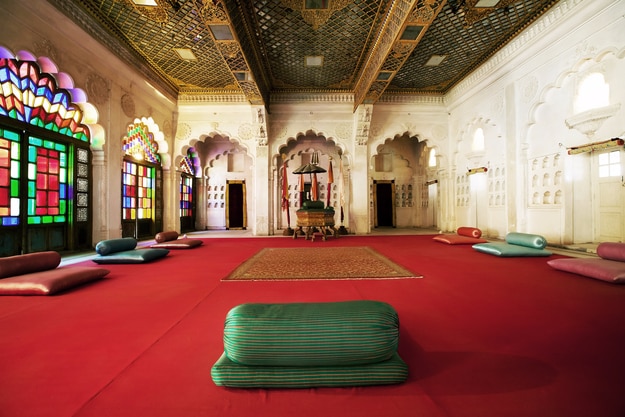 Another palace that lies within Mehrangarh Fort, Zenana Mahal was once home to the queens of Jodhpur, which is where it gets its name (Zenana refers to the part of a house reserved for women). At one time, the Zenana of the fort covered more than half of its total area. Today, the Zenana Mahal is a remnant of the lives of the womenfolk in Marwar. Moti Mahal Chowk in particular is an example of the grandeur that was so common at the time. It was a popular court for the Jodhpur queens, with several veiled windows (Jharokas) seen in its wings. There is other areas around the fort with Zenana courts and areas. One court lies near the Moti Vilas, while a huge chunk of the Zenana Mahal covers the coronation courtyard. 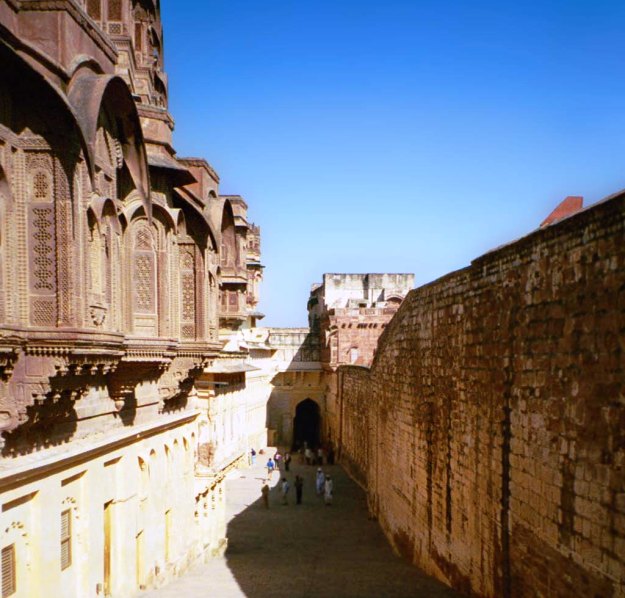 Another one of the gateways to Mehrangarh Fort, Loha Pol has its share of history too, albeit a dark one. It leads to the residences and palaces of the Marwar royal families, but it is more popular for the handprints of queens who killed themselves in the ancient practice of sati. Loha Pol, which literally means ‘Iron Gateway’, is considered the heaviest gate of all seven, and it certainly has the heaviest sense of history associated with it. It offers a window into the dark rites of the kingdom and a time centuries ago when widows would burn on the funeral pyre of their husband as an act of religious self-immolation. 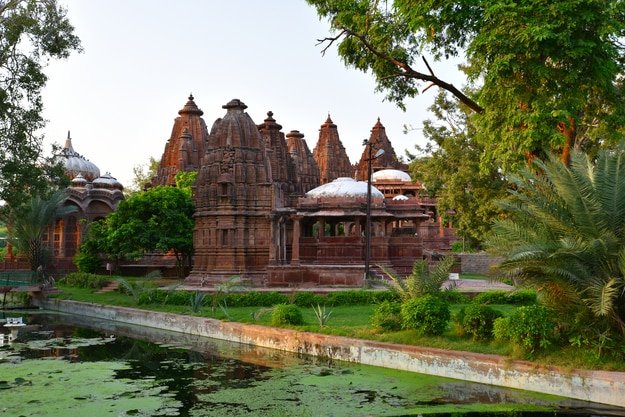 Located a little away from the main sights and sounds of Jodhpur city, Mandore Gardens is often forgotten by hurried tourists. Mandore was once the capital of the Jodhpur kingdom and still lies almost square in the middle of the city. It was abandoned with the completion of Mehrangarh Fort. Over the centuries, the town has seen several invasions, but today its main draw is its gardens. Mandore’s expansive gardens are filled with well-kept greenery and remnants of the ancient empire, along with monkeys giving company to street vendors offering hand-made wares. Within the garden lie the empty tombs of several Jodhpur emperors, intact in all their glory. ALSO READ: Ahmedabad to Jodhpur: How to reach Jodhpur from Ahmedabad by road