Last night, The Kaifiyat Express derailed in Uttar Pradesh injuring several passengers. We give you details of the helpline numbers released by the government and also some interesting facts about the superfast Kaifiyat Express. 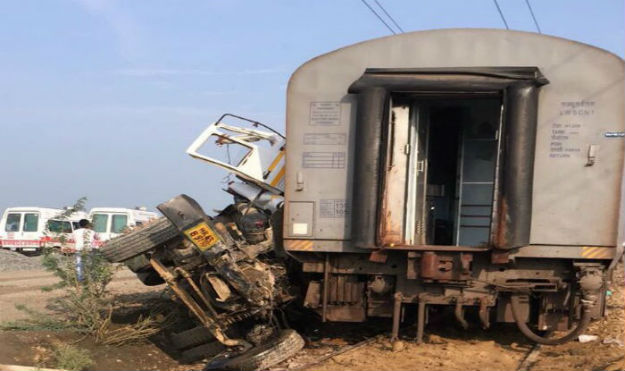 In yet another shocking railway accident this week, the Kaifiyat Express derailed near Auraiya district in UP injuring several passengers. While no casualties have been reported so far, there is a general worry surrounding the status of injured passengers, 4 of whom are critical. This is the second railway mishap after the derailment of the Kalinga Utkal Express last weekend. Railway Minister Suresh Prabhu has released a tweet saying he is personally looking into the matter. Railways DG PRO, Anil Saxena spoke to news agency ANI confirming the news of the accident. He said, Train No. 12225- Azamgarh to New Delhi- derailed in Auraiya district of Uttar Pradesh. When Kaifiyat express was passing by Ochalda and Patra station, by gate number 14 then a dumper collided with the train, derailing it with the engine and 12 coaches. There is no report of deaths. The accident took place at 2.40 am. Also Read - Please Don't Rush: Railways Relaxes Train Cancellation Refund Rules From 3 Days to 3 Months

The Kaifiyat Express is one of the prominent express trains of India. It covers some important places of north India on its route and is used by thousands of passengers for their commute. Here are some interesting facts about the Kaifiyat Express that you should know.

Destination: The Kaifiyat Express runs between Azamgarh in Uttar Pradesh and Old Delhi.

Distance and Time Taken: The Kaifiyat Express covers a distance of 803 km (one way) in around 14 hours and 15 minutes (14 hours 10 minutes for Azamgarh-Old Delhi and 14 hours 30 minutes for Old Delhi-Azamgarh)

Important Halts: The Kaifiyat Express has 15 halts. Its route takes you through some of the most important tourist destinations of north India. These destinations include Ayodhya, Lucknow Junction and Delhi itself. Ayodhya is a prominent pilgrim center for Hindu devotees while Lucknow is one of Indias best food cities known for its kebabs and biryanis. Old Delhi is home to some of the most historical sites in India like the famous Qutub Minar Complex. As such, the Kaifiyat Express carries a number of travel enthusiasts on a daily basis.

History: The Kaifiyat Express is named after feted Indian poet Kaifi Azmi. The legendary poet hailed from Azamgarh in Uttar Pradesh where the train begins.

Our thoughts and prayers are with the victims of the derailment accident last night. We hope and pray that they make full recovery and that important trains like the Kaifiyat Express do not meet with such tragic accidents in the future.