Kanatal: A dream destination in the Himalayas

There is no tal (lake) in Kanatal. Maybe it is lost somewhere in the dreamy mist that surrounds this little village or has just vanished into thin air. The locals say that there was once a lake,

There is no tal (lake) in Kanatal. Maybe it is lost somewhere in the dreamy mist that surrounds this little village or has just vanished into thin air. The locals say that there was once a lake, but the tal, as they call it, does not exist anymore. Perhaps it dried up in the mountains but the absence of the lake does not take away the beauty of the town. Also Read - Delhi Chalo LIVE UPDATES: Security Deployed At Delhi-Faridabad Border In View Of Farmers' Protest March

I reach Kanatal just as it is immersed in the rosy hues of sunset. The mountains are backlit with the crimson glow even as darkness soon descends on the little town in Uttarakhand. But what is even more spectacular is the moon rise; a tiny white curve spreading its light on the dark crevices of the mountains. Also Read - Lanka Premier League 2020 Live Streaming Details: Full Squads, Schedule, TV Telecast, Timings, Venues And All You Need to Know

Nestled close to Dehradun and Mussoorie, on the Chamba-Mussoorie highway in Tehri Garhwal district of Uttarkhand, Kanatal to many; is probably a transit town than a tourist destination. But it has slowly asserted its presence on the tourist map with its quiet getaway tag. Also Read - Cyclone Nivar: After 16 Years of Tsunami, a Puducherry Couple Has Returned to Same Relief Camp They Stayed in 2004

I drive into Kanatal after having landed in Dehradun airport from Delhi. The journey takes more than a couple of hours as we cross Rishikesh and stop by to see the Ganges. Little chai shops on the way interrupt our journey as we stop by to refresh ourselves. The evening lights come up as we enter. Perched almost at 8500 feet above sea level, the nondescript town oozes a certain charm that can only be experienced.

I wake up to see lush deodar forests offering sneak views of the mountain peaks with mists tip toeing on them. The trees whisper in the morning breeze but the mist unveils patches of white in the distant horizon. The mountains are still wearing the rosy look from the previous evening that I wonder if it is morning or evening. Time does stay still here.

There is something about sunrises in a hill station. The mountains look like a dream as they emerge out of the many layers of mist that covers them. They fade in and out of the milky fabric even as they merge with the mist. One can imagine a never ending line of mountain ranges, with their contours overlapping each other as they either seem joined at the hip or stretching themselves out, joining hands. A single peak peeps from behind them, its ridges marking a thin outline against the glowing sun in the mist, trying to make its presence felt. They come in different colours – rosy, golden, blue, white and even a tad bit colourless. I am wondering whether to continue on my walk or to just stop and etch the moment in my mind.

Kanatal may lack the colonial air of Mussoorie but it does give the Queen of Hills a complex with its pristine look. I go for a little drive, admiring the small houses huddled on the green slopes. The forests welcome the birds who raise a toast to the sunshine. A group of men are playing cards on the streets. I stop by near the Surkhanda Devi temple, which gives Kanatal its own legend. One needs to hike up a hillock to get there or you can go on a pony. According to the locals, it is believed that when Shiva was carrying the body of his consort Sati to Mount Kailash, her head fell here, thereby making it a Shakti Peetha.

A colourful bazaar near the temple attracts my attention. Amidst all the silence, this vibrant market is a pleasant assault on our senses. The locals gather, dressed in all their finery, as I stop by for some souvenir shopping. I drive on, admiring the views on the road and I stop at a point, where the mountains seem so close. Somewhere in the horizon shades of white emerge as I realize that I am gazing at the snow white peaks of the Himalayas.

Fresh fruits are sold on the streets as I continue my journey to the highest dam in the country – the Tehri Dam. Considered in the top 10 highest dams of the world category, it is built at a height of 260 metres on the River Bhagirathi. The mountains part ways to let the backwaters of the river flow as I see the dam from a viewpoint. A small ferry carrying some locals cruises on the blue green waters reflecting the mountains and the clear sky. Harnessing the waters of the Himalayan rivers, Bhagirathi and Bilangana, the dam provides hydro electric power as well.

While the scenery does take your breath away, it does come with its share of controversies, besides submerging towns. While it provides water to the nearby villages and towns and facilitates irrigation, activists have also created awareness of the potential environmental and social issues that were caused due to its construction

I continue my journey. Kanatals proximity to other towns helps one to plan the rest of the journey. Chamba, Danaulti, Mussoorie, Shivpuri, Rishikesh, Dehradun are all located close to this idyllic town. One can go trekking, rafting or just relax in the cool environments, gazing at the Garhwal Himalayan range. Spoilt by choices, I decide on Mussoorie as the roads open up and another journey begins. 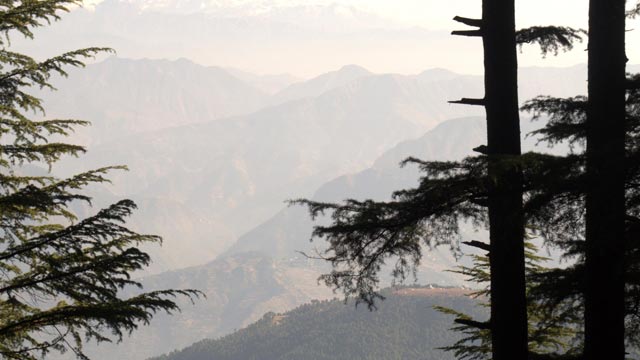 This article was first published in January 2013.