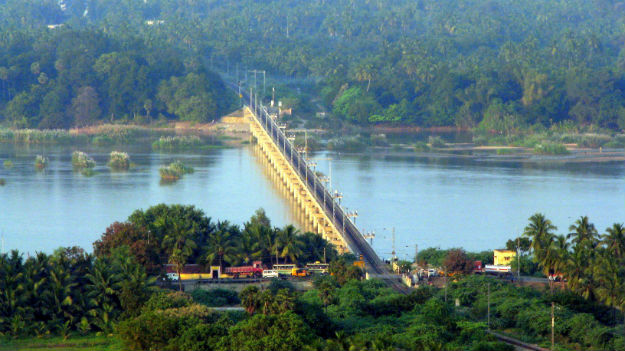 Today is an auspicious day in the Hindu calendar, especially for people in the south Indian state of Tamil Nadu. It is also a rare one for the Kaveri in Tamil Nadu as this day only comes once in 12 years. On this day called Kaveri Maha Pushkaram, thousands of devotees gather in the small island town of Srirangam to pay their respects and offer prayers to the river Kaveri or Cauvery. The aim is to ask for good rains and crops as the region survives on agriculture. The festival of Kaveri Maha Pushkaram goes on for 12 days. It is believed to be a 1000-year-old tradition and draws in devotees from various parts of the state. According to reports from Srirangams temple officials, around 20,000 people have already arrived at the religious spot. Many of these devotees are followers of Sri Sri Thridandi Sriman Narayana Ramanuja Chinna jeeyar swamy, who have arrived from the neighboring states of Telangana and Andhra Pradesh. ALSO SEE Top 5 temples of Tamil Nadu you simply cannot afford to miss Also Read - Entertainment News Today, March 20: Suchitra Krishnamoorthi's Daughter Returns After Being Stuck in US For 6 Days, Praises Govt Amid Coronavirus Lockdown

Kaveri Maha Pushkaram celebration is not just limited to Srirangam in Tamil Nadu. The word Pushkaran means worship of the sacred river. As such, it is celebrated along 12 major rivers by rotation. Each of these rivers is associated with a particular zodiac sign. The last of the 12 rivers by rotation for Maha Pushkaram celebration is the Godavari at Bhardrachalam in Telangana. Today is the turn of the Kaveri in Tamil Nadu and after this year, this auspicious day will be celebrated on the banks of the Kaveri only after 12 years. The river where the festival is to be celebrated depends on the position of Jupiter. The Maha Pushkaram period is when the celestial transit of planet Jupiter from Virgo to Libra takes place. This particular alignment of stars is known to happen only once in 144 years, which is what makes this day all the more special. Apart from Srirangam, Thula Kattam, which is the mouth of the river in Mayiladuthurai, will also celebrate Maha Pushkaram with great devotion  from September 12 to 24. Also Read - Karnataka Farmers Protest Enters Day 5; Irrigation Minister Says Nothing in Our Hand

The day of Maha Pushkaram is marked by holy dips in the sacred river. In Mayiladuthurai, a special tank has been constructed for devotees to have a holy dip. Like all other holy dips, this too is believed to absolve devotees of their sins. Prayer sessions are conducted with several ‘homams’ and ‘yajnas’ throughout the 12-day period. The auspicious day also happens to be the 1,000th birth anniversary of the Vaishnava ascetic Acharya Sri Ramanuja making it all the more important for Hindu devotees. Also Read - VHP for consensus on legislation for Ram temple

Apart from Srirangam, a place called Allur near Trichy is also observing Maha Pushkaram 2017 on the banks of the Cauvery this year. Due to these festivities, the Nagapattinam district is a delight to visit in this duration. It is a great time to witness the culture and tradition of the region and also see what a great deal these customs and traditions related to agriculture mean to the locals.