Kaziranga and Manas in Assam are the last refuges of the Indian Rhinoceros. 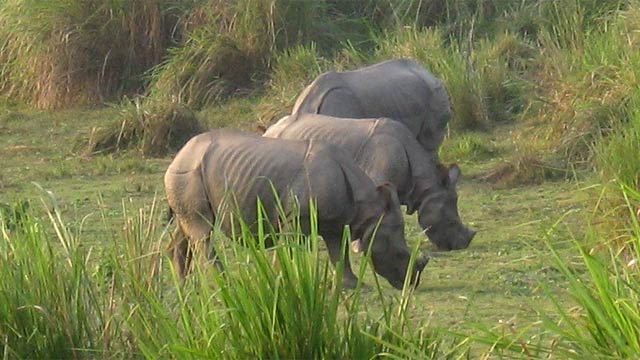 A UNESCO World Heritage site, the park today boasts of more than 70 per cent of Indian Rhino population

A herd of elephants or a family of rhinoceros passing by suddenly breaks the serenity of Kaziranga National Park in Assam and makes you aware of your own presence, for moments, before you choose to immerse again in the awe of nature. The innate beauty of the place transforms even the devout ‘city person’ to marvel nature’s beauty.Also Read - Viral Video: Woman Performs Bihu Dance on Manike Mage Hithe, Video Delights People | Watch

All this on the banks of the majestic Brahmaputra River, which according to Hindu mythology is the son of Lord Brahma and according to facts, the fifth strongest river in the world. Also Read - India vs England Highlights T20 World Cup Warm-Up Match: Ishan Kishan, KL Rahul Guide India to a 6-Wicket Victory Over England 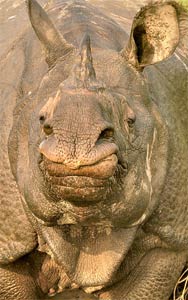 Rhinos were found along most north Indian rivers including Indus, Ganga and Brahmaputra

Spread over verdant green flood plains of 470 sq km in the Golaghat and Nagaon districts of Assam, the UNESCO World Heritage site is renowned for its successful conservation of one-horned Great Indian Rhinoceros (rhinoceros unicornis). Beginning with a few rhinos in 1905, the park today boasts of more than 70 per cent of the world’s population of the Indian Rhinoceros. Also Read - Only To Curb Trans-Border Crimes: BSF Says Jurisdiction Increased For CrPC Act, Passport Act

Interestingly, compared to a few centuries back when Rhinoceros was found across wetlands along most north Indian rivers including Indus, Ganga and Brahmaputra, its habitat in India today is limited to the two national parks of Kaziranga and Manas in Assam.

The Park has four main areas. The Agoratoli range, in the eastern part, comprises of forests dotted with grassland and water-bodies. It is the longest strip in the forest. The central Kohora range is the most easily accessible area from the Kohora range office. The Baguri range, in the west, is the shortest circuit but has the highest rhinoceros and buffalo density.  The fourth Burhapahar range includes the additional area attached to the Park.

The Kaziranga National Park, which was declared a national park in 1974, boasts of all the ‘big’ things. Ranging from the five meter tall elephant-grass to being home to the ‘Big Five’ including one-horned Rhinoceros, Asian Elephant, wild buffalo, tiger and swamp deer, the park houses some of the most captivating wild life in Asia. The Park also has the high density of Panthera Tigris or the Tiger because of its rich natural habitat.

The park claims to have a total of 52 mammalian species including 15 rare mammals like the Gangetic Dolphin, Chinese Pangolin, Hoolock Gibbon, Hog-Badger and the Flying Squirrel and 39 reptile species comprising the endangered Gharial and the rare Assam Roofed Turtle. It is because the Park offers a variety of habitats ranging from extensive flood plain grasslands to tropical moist deciduous forests. The frequent flooding of the park by River Brahmaputra helps sustain animal and plant life.

The experience of admiring the animals from a river boat cruise or from the back of an elephant is an incredible one. Humans are not allowed inside the Park on foot because many potentially dangerous animals are found in the area. Hence, the Park authorities have built some observation towers around the Park to closely observe the wildlife. Apart from the boat rides and some jungle jeep safaris, trained mahouts take the visitors through the park on a pleasure trip. Kaziranga also boasts of over 500 species of birds

Kaziranga is also a dream destination for bird lovers with almost 500 species of birds making it their home. The enormous bird diversity is because of park’s location at the junction of Australasia flyway and the Indo-Asian flyway. 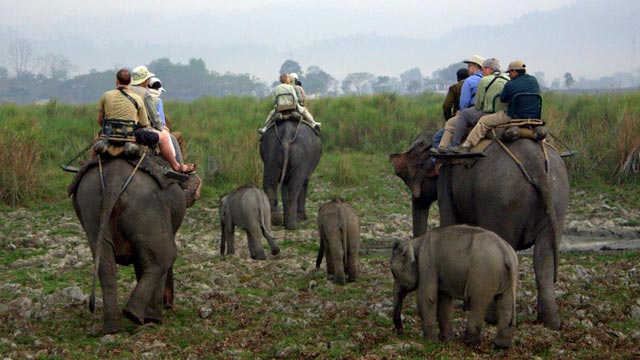 Tourists can also enjoy lush coffee and rubber plantations on the nearby Karbi Anglong hills lining the Park in the south.

Apart from the exceptional biodiversity values, the park has set an example for other wildlife parks to follow because of the dedication of its staff in protecting the wildlife and its habitat against all odds.