Lalbaugcha Raja 2017: How to reach Mumbai’s Most Famous Ganpati Pandal This Ganesh Utsav

Ganesh Chaturthi is the best time to visit Mumbai, when hundreds of temporary Pandals are set up across the city. And the most famous among them is the Lalbaughcha Raja in South Mumbai. Here is a complete guide. 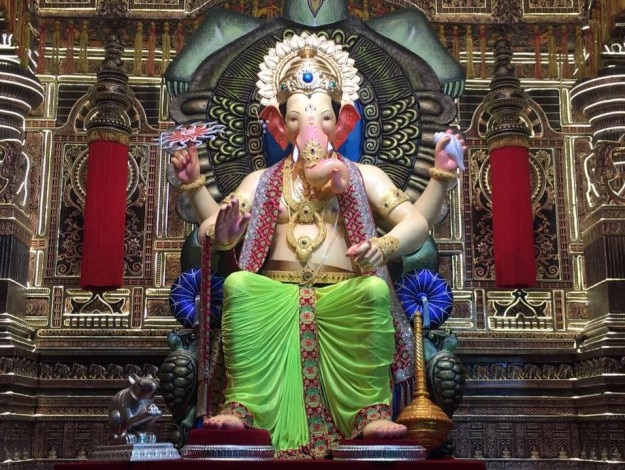 From August 25, 2017, cries and chants of Ganpati Bappa Morya will be heard across the city of Mumbai. The day marks the start of Ganesh Chaturthi, a ten-day festival to celebrate the birth of the beloved Hindu god Ganesh. In Mumbai and most parts of India, the festival is celebrated by bringing idols of the god into homes and communities for ten days or fewer (sometimes more). After days of festivities, the idols are taken in a procession to seas, lakes and other water bodies for immersion. Mumbai has hundreds of temporary platforms or Pandals where massive Ganesh idols are placed for community worship. And the most famous among them is Lalbaugcha Raja, the King of Lalbaug. ALSO READ: Ganesh Chaturthi 2017: Biggest Ganesh Pandals in Mumbai You Cannot Miss Also Read - Cyclone Nisarga: IndiGo Cancels 17 Flights to And From Mumbai, to Operate Only 3

Lalbaug is a suburb in South Mumbai, and it has been hosting the Lalbaugcha Raja for 84 years now. The Pandal is a huge deal, bringing in people from all around the state, including film stars and other big personalities. Mumbai’s Pandals usually change their theme for every Ganesh Chaturthi, and the Lalbaugcha Raja is no different. For 2017, the Pandal will sport a golden Raj Mahal theme, though the idol itself will be made by the same sculptor, Santosh Kambli. Its theme will be Kurma, the second turtle avatar of the Hindu god Vishnu and a symbol of longevity. Lalbaugcha Raja is expected to see more than a million visitors this year, and it has long been the most popular Pandal in Mumbai. Also Read - 'Touching Gesture'! Narayana Murthy Touches The Feet of Ratan Tata And Twitter Can't Stop Hailing The 'Historic Moment'

The history of Lalbaugcha Raja can be traced by to 1935, when the Kambli family that ran Kambli Arts began making the idol. In the years since it gained fame, the idol’s design has become patent protected. They say that all your wishes are fulfilled by the Lalbaugcha Raja, and there are long lines of devotees every year waiting to get a chance to offer their prayers. In fact, two lines are arranged for the Lalbaugcha Raja; one line takes you to the feet of the god, to get your wishes fulfilled, and the second line takes you to a demarcation 10 meters away from the idol. The lines can go up to 2 km at times, but they move pretty fast. NOW READ: Ganesh Chaturthi 2017 Celebration in Chennai: Here is How Vinayak Chaturthi is Celebrated in Tamil Nadus Capital Also Read - JNU Violence Highlights: Student Protests Emerge Across Delhi, Mumbai, Kolkata; Film Fraternity Joins in

The Lalbaugcha Raja is part of the Mumbai Ganesh Darshan package tour that takes you to iconic Ganesh Pandals throughout the city. If you are part of the tour, you won’t have to wait in line to get your glimpse of the famous idol. The Pandal is open 24/7, and the busiest hours are from the evening, stretching until midnight. It is within walking distance from three Central line stations: Chinchpokli, Currey Road and Lower Parel. The idol will leave the Pandal for the Visarjan procession on September 4, 2017.