Mahavir Jayanti celebration in Jaipur: How this Jain festival is celebrated in the Pink City 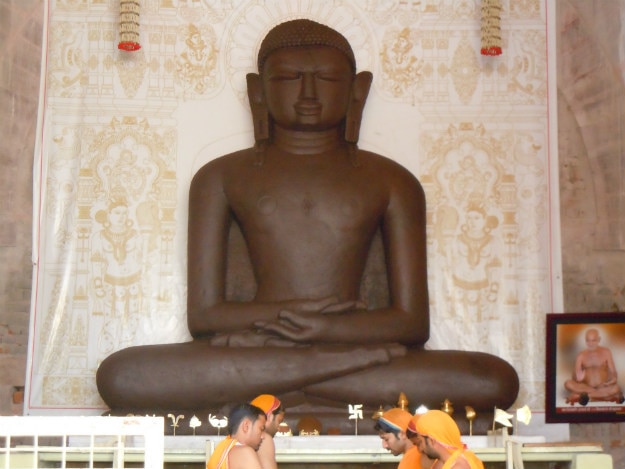 Mahavir Jayanti, a holiday that marks the birth of Mahavira, the last Tirthankara or enlightened soul in Jainism is celebrated on April 19 this year. The festival is of great importance to the Jain community all across India and the world and celebrations take place in different regions. The Jain community of Jaipur also celebrates Mahavir Jayanti with great zest and fervor. Also Read - Terrifying Videos of Locust Attack Take Over Twitter; 'What's Wrong With You 2020', Ask Netizens

This year, they planned a three-day celebration beginning on April 17 and culminating on April 19 with several festivities on each day. Mahavir Jayanti started with devotional songs at a Jain temple in Gopalji ka Rasta in Jaipur on Day 1. Several people from the Jain community gathered to sing and make merry in the evening at this temple. Also Read - Shocking Extent of Hunger: Starving Man Found Eating Dead Dog Near Jaipur, Viral Video Stuns India

2016 marks the 261st birth anniversary of Mahavira and the festivities are bigger than ever to make this day a significant affair. On the second day, a devotional rally called ‘Prabhat Pheri’ was held where sermons of Jain munis were organized. Events like blood donation camps, free distribution of food to the poor and lighting of lamps were also part of the celebration.

ALSO SEE How Mahavir Jayanti is celebrated in India

The third day of Mahavir Jayanti celebration in Jaipur began with decking up all Jain temples in the city for the festival. A procession called ‘Shobha Yatra’ is also part of the celebration today. An Ahimsa Rally was organized by two social groups to spread awareness about compassion towards birds and animals. Apart from these, Mahavir Jayanti is also celebrated with special prayers and rituals planned for the day in Jain temples.