As we get close to Makar Sankranti 2018, here is a look at how this auspicious festival is celebrated in Maharashtra.

One of the most auspicious days of the Hindu calendar is just round the corner. January 14 is celebrated as Makar Sankranti every year all over India. It is unique in that it is one of the few solar festivals as compared to other festivals which mostly follow the lunar cycle. Makar Sankranti marks the end of the harvesting season in several parts of India. From a religious standpoint, it is celebrated to pay respects to the Sun god Surya. But mainly, Makar Sankranti is a huge cultural event in several parts of India making it one of the most vibrant festivals of the country. Maharashtra is one of the states that celebrate Makar Sankranti with great enthusiasm and devotion. (ALSO SEE Makar Sankranti 2018: Best Places to Visit on This Festive Weekend) As we get closer to maker Sankranti 2018, heres a look at how Maharashtra celebrates this festival. Also Read - Coronavirus in India: Another COVID-19 Patient Dies in Maharashtra, Death Toll in State Rises to 21 | Highlights 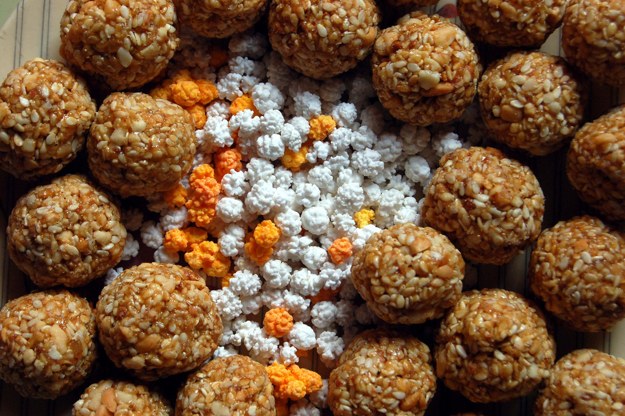 Til gul is one of the main food items that mark the festivities during Makar Sankranti in Maharashtra. These little sweet balls made from sesame seeds and jaggery are exchanged between friends and family members on the occasion on the auspicious event. This exchange is often accompanied by saying out the phrase til gul ghya, god god bola which roughly translates to have til gul, speak sweetly. Another delicacy prepared in Maharashtra during Makar Sankranti is Puran Poli (flat bread filled with ground jaggery). CHECK OUT Makar Sankranti 2018: How Magh Bihu is Celebrated in Assam Also Read - Assembly Elections 2019 Vote Counting Updates on Akola East, Murtizapur, Risod, Washim, Karanja and Dhamangaon Railway Seats in Maharashtra

Makar Sankranti celebrations in Maharashtra usually last three days. People clean their homes well in advance and on the day of Sankranti,they wear ethnic clothes to bring in the festivities. On the first day called bhogi, people pay their respects to the Sun Goa and step out to fly kites. The second day is for married women to carry out the rituals of haldi-kumkum which involves applying turmeric and vermillion on each others foreheads. The last day is called Kinkrant which marks the day of the defeat of demon Kinkarasur. Also Read - Earthquake in Maharashtra: Tremors Measuring 3.6 on Richter Scale Jolt Palghar

Makar Sankranti is an auspicious day and therefore considered perfect for buying new things. It also marks the beginning of warmer days after the winter season.