Makar Sankranti 2018 in Tamil Nadu: How Thai Pongal is Celebrated

Tamil Nadu will be celebrated one of its biggest festivals in the year, Pongal. 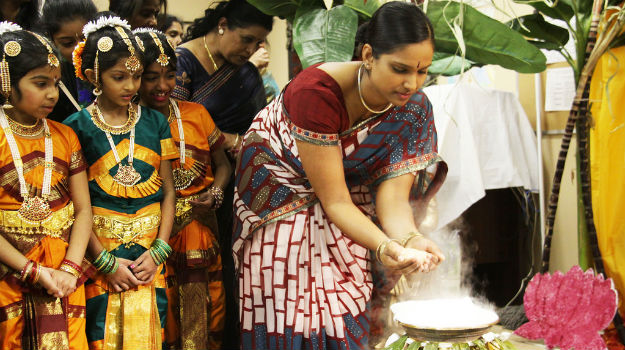 Today marks the beginning of one of the biggest festivals in Tamil Nadu: Thai Pongal, also called Pongal. The harvest festival is Tamil Nadu’s own version of Makar Sankranti, celebrated across India in different forms. Pongal this year will run from January 14 to January 17, 2018, while Makar Sankranti in its various shapes and forms will either start or end today, depending on where you are witnessing the celebrations. Tamil Nadu’s festival, celebrated in parts of Kerala as well, gets its name from the Tamil word ‘to boil’ or ‘to rise’ and from the period of Thai, which usually falls on January-February. ALSO READ: Makar Sankranti 2018 Celebration in Maharashtra Also Read - Desperate For Alcohol Amid Lockdown, 3 Men in Tamil Nadu Die After Drinking Paint Varnish

Pongal celebrates the harvest of rice, sugarcane, turmeric and other cereals and plants vital to the culinary culture of Tamil Nadu. It gives thanks to nature for its bounties, and celebrates the cycle of life that gives people the essentials to survive. On this day, people believe that problems and disputes within friends and family will come to an end, with the saying ‘Thai pirandhaal vazhi pirakkum’. Here’s a quick look at how the festival is celebrated. Also Read - Fire Breaks Out in Chennai as People Burn Crackers in Response to PM's Call, No Deaths or Injuries Reported

The first day of the festival is called Bhogi, the same name as the Makar Sankranti festival celebrated by the northern neighbors in Andhra Pradesh and Telangana. On this day, people give thanks to the god Indra, ruler of the rains and clouds, for blessing the land. The ritual of Bhogi Mantalu is followed, where old household items are burned in a massive bonfire and people sing and dance around the fire in praise of the gods. Also Read - Doctor Feeds Food to Coronavirus Patient in Absence of Family, Photo Goes Viral

Pongal is officially the name of the second day of the larger festival, and it is where most of the popular rituals can be seen. You’ll find thousands outside performing the Pongal puja, where rice is placed in an earthen pot full of milk and boiled. When the milk pours out upon boiling, cries of ‘Pongal’ are raised by the women. New clothes are worn and beautiful auspicious designs are drawn in front of homes using white lime powder.

The third day, called Mattu Pongal, is a day dedicated to cattle. Cows are decorated with bells, flower garlands, colorful beads and worshiped. They are fed the traditional dish of Pongal and taken out, the sound of bells resounding in villages across Tamil Nadu. In some places, cows are raced and showcased, and other fun activities are organized. NOW READ: Makar Sankranti 2018: All the Ways in Which Makar Sankranti is Celebrated

The final day of Pongal is called the Kannum Pongal, and on this day the last ritual is performed to venerate the soil. A turmeric leaf is washed and servings of rice, sweet Pongal, betel nuts, betel leaves, sugarcane and more are placed on and around it. Women perform this ritual together in front of their home, praying that their household prospers in the year to come.