A snack from Mumbai is making it big in Chandigarh! 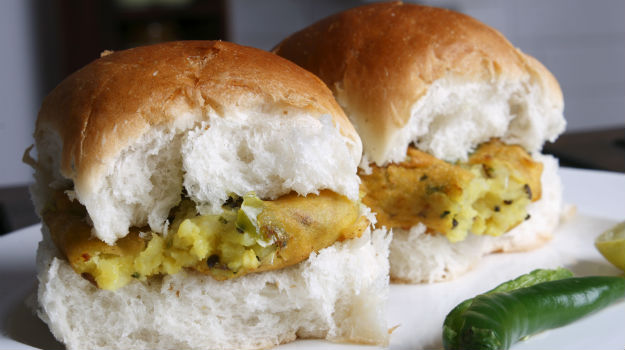 Mumbai’s famous ‘vada-pav’ – a spicy, fired potato ball in a buttered square bun – may hardly have anything to do with the butter-chicken loving Punjabi tummies but a franchise of the Mumbaiya street food is surely satisfying the big, fat Punjabi belly.

“Punjabi tadka toh roz khaate ho, Ab Mumbaiya Chatka Khao’ – the tagline for ‘Goli’, the brand that has brought the all-vegetarian vada pav to Chandigarh and its neighbourhood, says it all.

And the city’s food lovers have lapped up the vada pav flavour with all their warmth. Chandigarh has two outlets of the brand while the suburbs of Panchkula, Mohali and Zirakpur have one each. Three more, in Chandigarh, Mohali and Manimajra, will open shortly.

In just a few months after the Chandigarh outlet in Sector 19 opening, it is becoming quite popular.

“We sell up to 500 vada-pavs from this outlet alone. People are loving the snack here. The variety available too attracts them,” Arvind, a staffer at the outlet, told IANS.

The rush of people continues all day long even though the outlet, which operates from a small corner booth, has no space or arrangement for seating people or even tables for people to stand and eat.

“As long as the food is good, one does not mind having it standing in the open or sitting inside the car. The vada pav here is already a hit,” Vishal Khanna, a student at a private university, said.

‘Goli’, which claims to be India’s No.1 vada pav brand with over 350 stores across 19 states and 67 cities, is offering nearly 15 different types of vada pav flavours here.

“The popular ones in this region are the maharaja vada pav, classic vada pav, mix veg vada pao and the aloo tikki vada pav,” a sales executive at the outlet pointed out.

For those wanting their dish to be spiced up, the masala vada pav is the favourite one.

“One good thing is that these vada pavs are priced like any street food. These range from Rs.25 (40 cents) to Rs.60 and are quite affordable. If you want to have more than one, it still does not pinch you,” Anjali, a housewife, told IANS.

While the vada pav is prepared here from ingredients purchased locally, the masalas and other things come from Mumbai.

With specialty and fine-dining restaurants opening in and around Chandigarh in good numbers in recent times, street food too is not losing out, with ample scope for business.

(Jaideep Sarin can be contacted at jaideep.s@ians.in)