How do you think bhajiayas will taste in China? 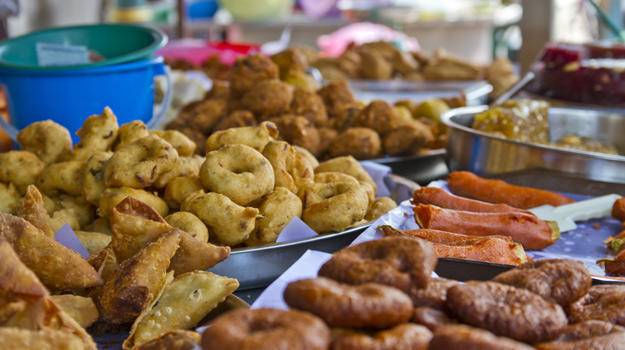 Fancy visiting a restaurant in China, placing the order in Hindi and gorging on delectable paapri chaat or finger-licking pav bhaji with Bollywood chart-busters playing in the background? It sounds fanciful, but is actually true, thanks to a man who aspired to bring Mumbai street food in the land of dumplings and noodles. Also Read - Mumbai Rains: Heavy Rains Paralyse City, IMD Warns of 'Flooding', Local Trains Suspended Due to Waterlogging; BMC Declares Holiday

An assimilation of Mumbai’s two most famous imports to the world – Bollywood and street food – the Bollywood Cafe located in Shenzhen city – China’s first and one of the most successful Special Economic Zones – has been a big hit among foodies, with its array of mouth-watering Indian cuisine. Also Read - Kangana Ranaut Receives Notice From BMC Over 'Unauthorised Construction' of Her Residence, Here’s What They Found ‘Illegal’

ALSO SEE: Street food you should hog on in the top 11 cities of India!

Having moved to China as a chef two decades ago, Murli Shetty’s idea behind setting up the Bollywood Cafe was to do a Nelson Wang – the godfather of Indian-Chinese cuisine and credited with making Chinese food an inseparable part of Indian life.

“It is said that in India if you are not eating Indian food, you are sure to eat Chinese. This popularity is because of the ingenuity of Wang in Indianizing Chinese cuisine to suit the desi taste buds,” Shetty told this visiting IANS correspondent.

While there are Indian restaurants across China serving mostly north Indian cuisine, there aren’t many dishing out the likes of evergreen Indian snacks like samosas, pakoras and dahi vadas or the staple South Indian delectables – idli, dosa or uttapam.

“Indian food, particularly snacks, are a rage for their taste but the oil and fatty contents act as deterrent, especially for the Chinese who are known to avoid oily and greasy food. So we have cut out on the fat quotient while simultaneously retaining the taste to make them palatable to the Chinese.

“We have tried to do a Nelson Wang by ‘Chinaising’ Indian cuisine yet retaining its authentic flavour,” said Shetty.

“The name Bollywood Cafe reflects the essence of India – movies and food. It’s our effort to take back Indians residing here on a nostalgia trip. It’s a place where people can relive their days back home when they ate samosas or vada paav chatting with friends and family,” Shetty said with a smile.

Located near the Luohu Port, Bollywood Cafe is a hit among the Indians but the locals too throng the place. Unable to cater to the swarming number of customers, Shetty has now opened a branch in neighbouring Futian.

The Cafe is also a happening place for Indians working in the country to catch up with friends and fellow country folks.

“Coming here makes us feel as if we are in India. It’s not only the food but the ambiance, the staff – there is so much of Indianness here. Much like back home, I can cry out to the waiter in Hindi asking for a plate of tandoori chicken or mutton biriyani,” said Ravi Ahirwar who works in an MNC here.

The place is also much sought after for Indians preferring vegetarian food.

For the 50-odd staff, Bollywood Cafe is home far away from home.

“I have been working here for the last three years. Staying away from the family is difficult. But working here makes us feel at home. The entire staff is like a family which helps in lessening the yearning to get back home,” said Subhash, who works as a waiter.