The Pandharpur Yatra or pilgrimage held every year to the famous Vitthal Temple on the banks of river Bhima, is one of the biggest pilgrimages in Maharashtra. Pandharpur in Solapur district, is also c

The Pandharpur Yatra or pilgrimage held every year to the famous Vitthal Temple on the banks of river Bhima, is one of the biggest pilgrimages in Maharashtra. Pandharpur in Solapur district, is also called the religious capital of Maharashtra and the temple is dedicated to Lord Vitthal, an incarnation of Lord Krishna. Also Read - 6 Charged Under NSA Over Illicit Liquor Trade in Bhopal

Held every year on the day of Ashadhi Ekadashi, the pilgrimage or wari has been held without break for more than 700 years. Mainly venerated by the Warkari Sampraday or the sect, the appeal of Lord Vitthal has spread and has resulted in devotees from neighbouring states like Karnataka and Andhra Pradesh undertaking the pilgrimage. It is not unusual to see even foreign nationals being part of the pilgrimage. Also Read - SBI SO Recruitment 2021: Vacancies Notified For Specialist Cadre Officer Post | Apply by Feb 12, Check Details Here 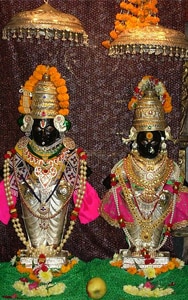 However, what makes the event stand apart from other pilgrimages is the fact that it begins over a fortnight. As part of the pilgrimage, padukas or wooden slippers of several saints including Sant Dnyaneshwar and Tukaram are taken out in procession from various parts of Maharashtra and culminate at Pandharpur. This year the palkhi (palanquin) of Tukaram started for Pandharpur from Dehu near Pune on June 10. Also Read - MUN vs LIV Dream11 Team Tips And Predictions, FA Cup: Football Prediction Tips For Today’s Manchester United vs Liverpool on January 24, Sunday

There is an interesting legend how Lord Vitthal came to be venerated at Pandharpur. The Lord once visited the home of his devout bhakta (devotee) Pundalik. Pundalik, who was engrossed in taking care of his parents, continued to take care of them despite knowing the fact that the Lord had come to visit him. He threw two bricks for the Lord to stand on till he finished his work.

What happened next? Did the Lord take offence to Pundaliks act? Absolutely not; the Lord was impressed with Pundaliks devotion to his parents. At Pundaliks request, the Lord agreed to stay forever at Pandharpur so that others could also venerate him.

Since, he stands on bricks Vitthal is also called Vithoba. Saint Dnyaneshwar, who is credited with translating the Bhagwad Gita into Marathi and making it accessible for the common man, spread the fame of the Lord far and wide. He was also responsible for breaking the shackles of superstition and bringing about a cultural renaissance. Following Dnyaneshwars footsteps, Saint Tukaram also spread the message of Bhakti among the poor masses.

In 1685, the youngest son of Tukaram introduced the palkhi and has become an important part of the pilgrimage. The palkhi involves the carrying the silver padukas (foot impressions) in a palanquin from Dehu to Pandharpur and those of Saint Dnyaneshwar from Alandi. The palkis of Tukaram and Dnyaneshwar are joined by Eknath’s from Paithan, Nivruttinath’s from Trimbakeshwar, Muktabai’s from Muktainagar, Sopan’s from Sasvad and Saint Gajanan Maharaj from Shegaon. Warkaris accompany the palkhis singing Abhangas (hymns composed by the Bhakti saints).