Overlooking the Lysefjord in Norway is Preikestolen or Pulpit Rock, a unique square-cut cliff that promises the view of a lifetime. Combine the 6 km hike to Pulpit rock with a cruise along the fjord for a complete experience.

Imagine looking out into the majestic fjords of Norway from the top of a square cliff, with the clouds and steep mountains around you for company. That’s the view you get from Preikestolen, popularly called Pulpit Rock, a unique square-shaped rocky cliff 604 meters above sea level that looks over Norway’s Lysefjord. The cliff is a 6 km hike from the base, the Preikestolen Fjellstue mountain lodge. You ascend around 350 meters along the way, with guided tours taking you through the region every day during the trekking season from April to October. Combine it with a cruise along the fjord, and you get a window into the incredible natural treasures that Norway has to offer. But just saying that is not going to convince you. As they say, a picture is worth a thousand words. So here are 11 of them. ALSO READ: This road in Norway is the most dangerous road in the world! Also Read - Chess: Viswanathan Anand Has Another Mixed Day, Magnus Carlsen Extends Lead

The mountains on the route to the Preachers Pulpit Rock 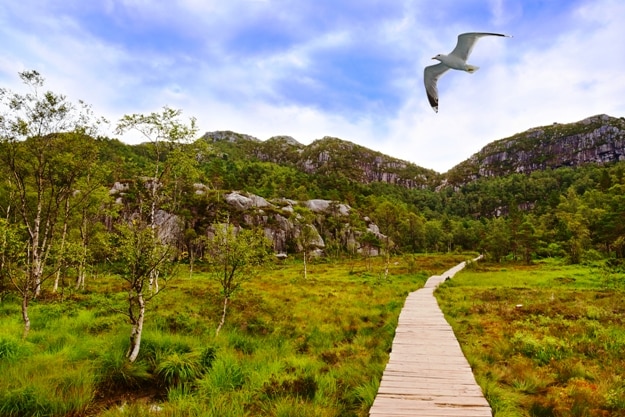 Preikestolen, seen from below at a distance on a dark day with a lot of fog 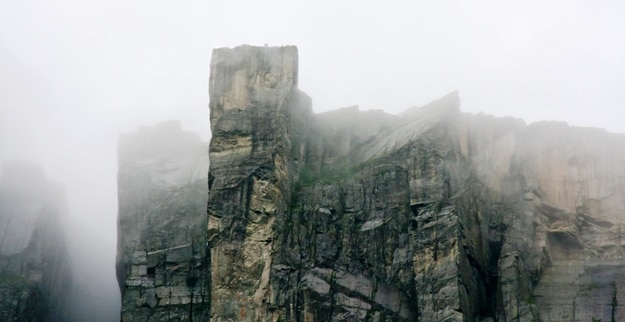 People standing atop Pulpit Rock, with the Lysefjord in the background 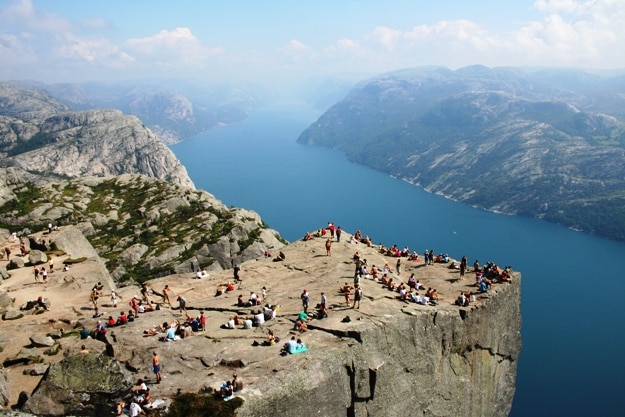 Another view of Pulpit Rock, this time with the mountains on the other side of the fjord 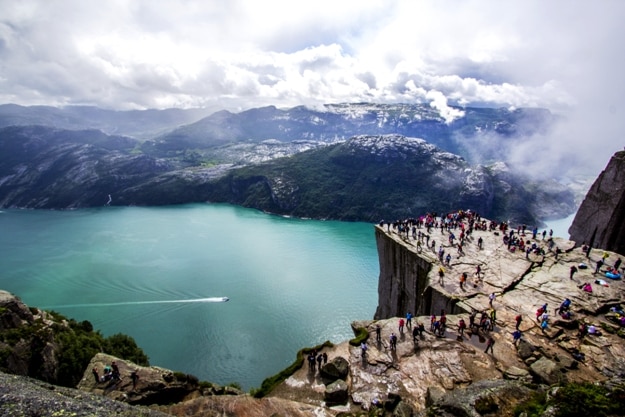 A couple sit near Pulpit Rock; the Lysefjord disappearing into the horizon 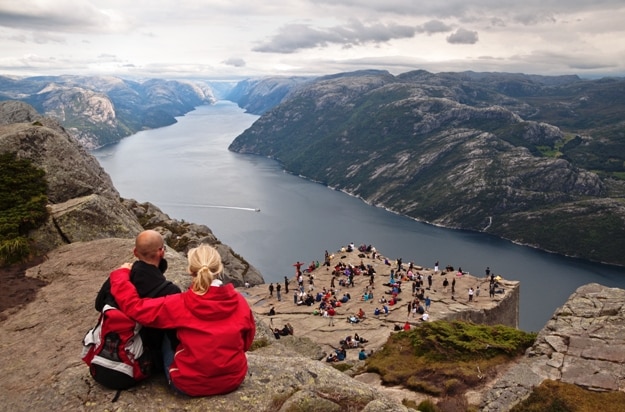 Pulpit Rock on a less crowded day; the sharp, jagged edges of the cliff are clearly visible 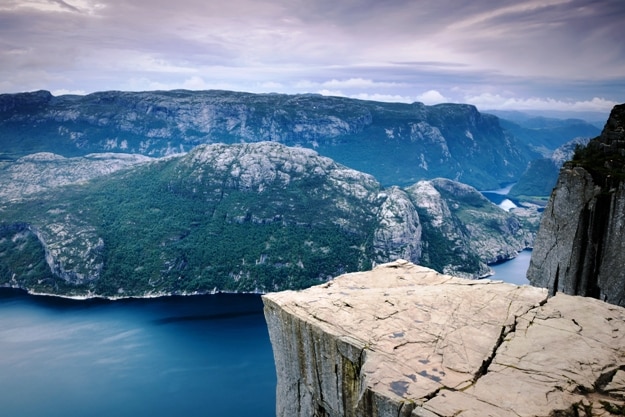 A group of friends look over the edge of Preikestolen 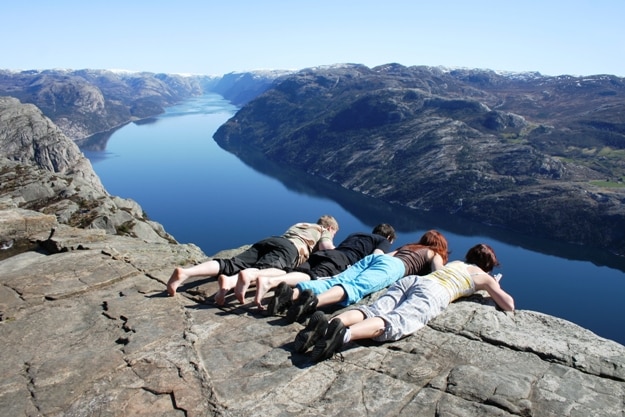 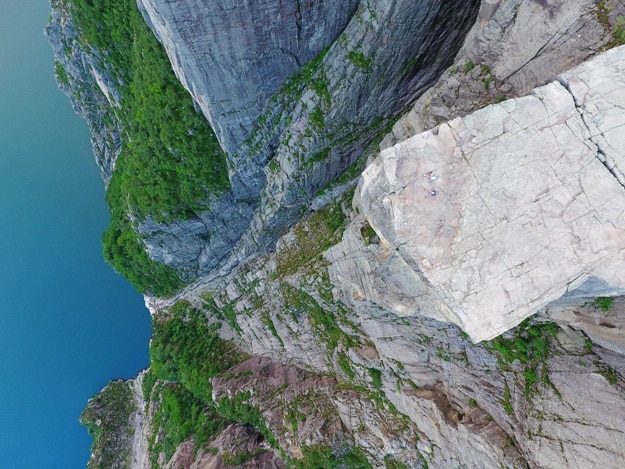 Trolltunga, or the Trolls Tongue, is another popular hiking spot near Pulpit Rock 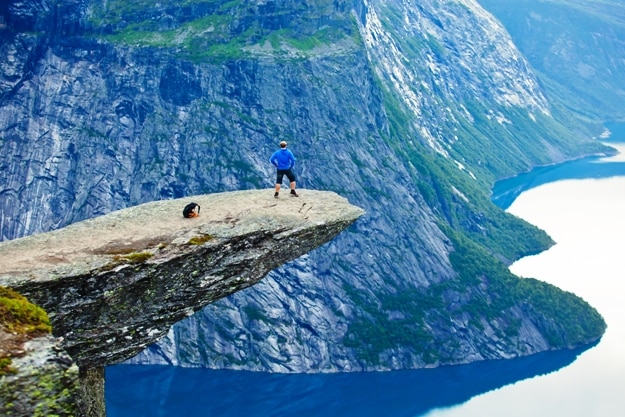 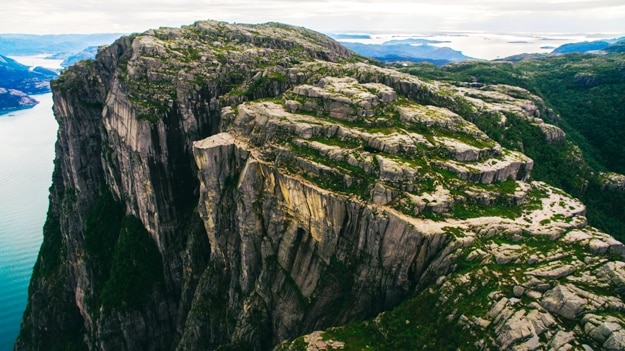 And finally, a bird’s eye view of Preikestolen; the route can be seen trailing away on the right 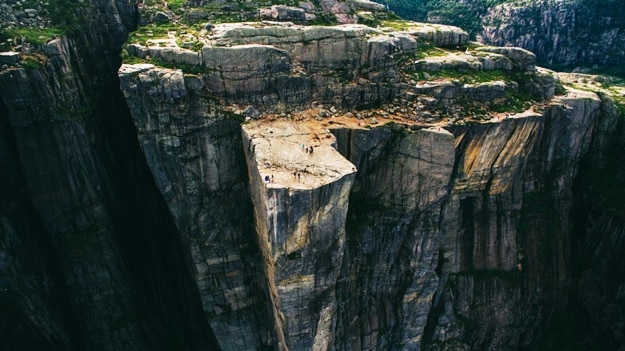 Pulpit Rock is pretty popular, attracting plenty of people every day during peak months. If you prefer not to share the square cliff with others, you can start the trek in the night and catch the sunrise at the top. Apart from Preikestolen Fjellstue, there is also Lilland Hotell nearby where you can stay. You can stay at Stavanger as well, from where you can take a cruise through the Lysefjord. NOW READ: This is the most stunning time-lapse video of Norway you will ever see!

The square shape of the cliff is a wonder of mother nature, the result of the expansion of ice around 10,000 years ago. It was called Hyvlatånnå in the past, which translates to planed tooth. But it was discovered as a tourist spot only in 1900.