Porsche Luxury Yacht - these three words put together are enough to spark your wanderlust and get you dreaming of the cruise of a lifetime. Porsche has launched a hybrid yacht in association with yacht builder, Dynamiq, and if you are interested in getting your hand on one, all you need is $16 million. 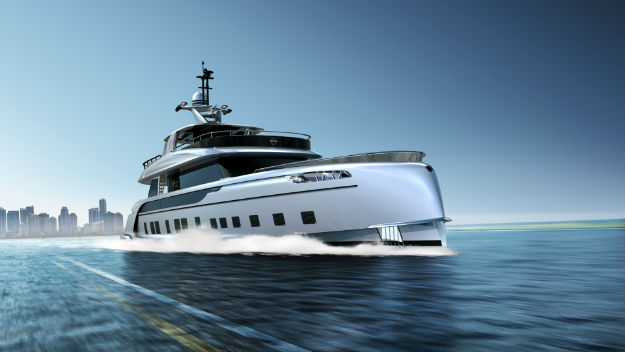 One of the first images that come to mind when you think of luxury is a Porche car. Known for its elegant look, stellar performance and ravishing design, Porsche is a name that many an automobile lover dreams of, no matter what his bank balance. And now, Studio F.A. Porsche, the automakers design house has gone a step ahead and outdone itself to provide you with a bigger dream object  A Hybrid Superyacht. Thats right! Porsche has officially launched a yacht that will redefine luxury to say the least. Constructed by Dynamiq, a luxury yacht builder, the Porsche Superyacht named GTT 115 will make its debut at the upcoming Monaco Yacht Show on September 27. While we would need to wait till then to get a closer look at the stunning luxury yacht, here is what we already know about the vessel. Also Read - Porsche Taycan is the first proper challenger to Tesla Model S, has a range of 450 kilometers Rendering of the interior of Porsche GTT 115 – Dynamiq

The Porsche superyacht measures 35 metres (or 115 feet). It is painted with Rhodium Grey metallic paint giving it a classy, supreme look. The collaboration between Dynamiq and Studio F.A. Porsche means that the yacht is sure to have the best of both worlds. Its futuristic design makes it an extremely alluring vessel to take a cruise on. It offers efficient fuel consumption for 3,400 nautical miles and can cruise at a cool 21 knots. The CEO of Dynamiq, Sergei Dobroserdov has rightly called the GTT 115 “the modern gentlemen’s superyacht”. In a press statement released earlier, Roland Heiler, CEO of F.A. Studio Porsche said, “Taking the spirit of high-performance sports car styling to the high seas, the Dynamiq GTT 115 is designed to appeal to car lovers and forward-thinking yacht owners. ALSO SEE Top 10 luxury hotels in India that offer a lavish stay Also Read - Court orders diesel ban on major Berlin roads

It looks like the first batch of people the yacht will attract is Porsche car enthusiasts. It was launched in Viareggio, Italy and has captured the attention of several cruise lovers. With only 7 units available, the yacht is a novelty purchase and is bound to stir up some competition amongst those who love to spend on luxury items. Check out this cool video by Dynamiq to know more: Also Read - Audi names interim CEO after boss arrested in diesel probe

The yacht costs 13.9 million or $16.7 million which means you may not have enough time to save up to get your hands on one of these. Nevertheless, come September 27 and you will be able to get a closer look at the stunner and print out a motivating poster for your room wall.