Priyanka Chopra at Lalbaugcha Raja 2017: Globetrotter Actress Is Back in Mumbai for Ganpati Utsav

Priyanka Chopra went for a midnight darshan of Lalbaugcha Raja 2017 last night. She followed it up with a visit to Marine Drive and got nostalgic about it. View Pics here. 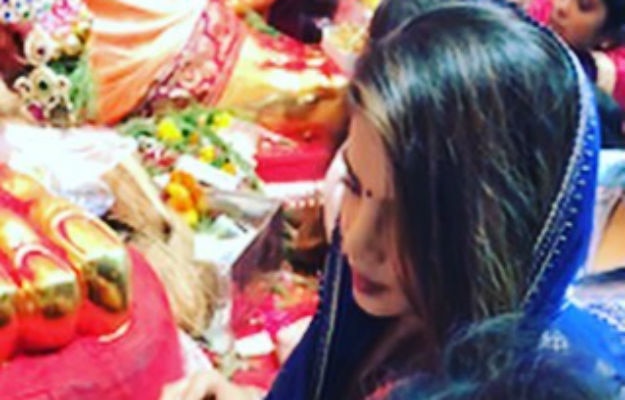 It would be fair to say that Priyanka Chopra is Indias most popular celebrity across the globe right now. Thanks to her US show Quantico, her role in Hollywood movie Baywatch and her numerous red carpet appearances where she makes heads turn with her grace and panache, Priyanka Chopra is a name most people on the planet are familiar with. Priyankas work in Bollywood and in the US keeps her on the move making her quite the globetrotter. Her Instagram account is flooded with pictures shot at various parts of the world. Be it Prague, Cannes or Miami, Priyanka has been around enough exotic places. However, she is also the best person to tell you that there is no place like home. Every time Priyanka is back in Mumbai, she feels enthusiastic and lets her fans know how happy she is. Mumbai is currently basking in the glory of Ganesh Chaturthi 2017 celebrations, one of its biggest events every year. No matter where they are, most celebrities come back to the city during this time to pay their respects and seek the blessings of Lord Ganesha. Priyanka, who seems to be quite religious, too took a break from her foreign routine to pay a visit to the city of dreams for Ganpati Utsav. And it looks like the first place she visited was Lalbaugcha Raja! Mumbais Ganpati pandals are popular all over the world, just like Priyanka, but the most famous one among them is the one at Lalbaug. Pictures of Lalbaugcha Raja 2017 went viral a week ago. And now, with Ganesh Chaturthi celebrations in full swing, it is being visited by the whos who of the country. Several Bollywood celebrities visit the Lalbaugcha Raja to seek his blessings. Priyanka is no exception in this regard. She went for a midnight darshan of the massive idol last night and posted this wonderful photo on Instagram. Also Read - Ganesh Visarjan 2017: Your Guide to traveling Around Mumbai During Ganpati Visarjan

Amazing darshan #lalbaugcharaja #ganpatibappamorya#midnightDarshan thank you everyone for making it so simple @madhuchopra @shaina_nc Also Read - How to Reach Dagdusheth Halwai Ganpati temple in Pune by road, train and flight

And thats not it! The gorgeous and talented actress followed it up with a visit to the popular Queens Necklace in south Mumbai. She sat down at Marine Drive, which is one of the most popular hangout spots for locals in Mumbai, and looked at the waves of the Arabian Sea like so many Mumbaikar do every day.

It’s been years since I’ve just sat by the ocean at Marine drive.. used to be one of my favourite things to do when I modelled.. I guess In the hustle bustle of life we just don’t pause to feel the breeze..the beautiful #queensnecklaceJust .. #simplepleasures #PostDarshanChill #incognito #midnightTafree #mumbairomance @tam2cul @sudeepdutt @mushtaqshiekh #mumbaijourney #17yearsandcounting #nostalgic

Her caption proves that no matter where she goes, this is where her heart is. Mumbai has quite a bunch of places which locals frequent for a pleasant evening. Marine Drive is one of them and there is hardly a Mumbaikar who has not gazed at the horizon from where Priyanka is seen sitting in the picture.

Heres hoping that Priyanka Chopra travels to more countries and makes waves wherever she goes, but always comes back to this marvelous city where it all started for her!