Priyanka Chopra is now busy shooting for the next season of Quantico, but she took a few days off to head to Italy and stop over at the regular tourist haunts. Here's a look at her Italian adventures. 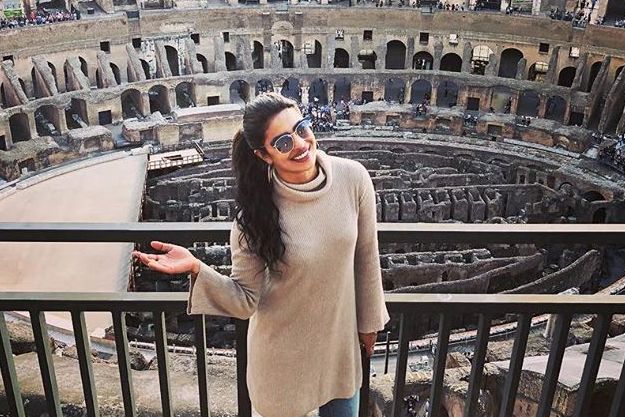 Priyanka Chopra, who’s been hitting it out of the park with every venture and making us all proud, is now hard at work for the third season of Quantico, the television series that was her big break in Hollywood in 2015. But before she sat down to work, Miss Chopra decided to hit the streets of Italy and quickly tour its big landmarks. Take a look. ALSO READ: Priyanka Chopra is in Prague and we cant stop swooning over her photos Also Read - Trending News Today April 04, 2020: America Finally Comes up With Coronavirus Vaccine? International Poll of 6,000 Doctors Back Trump's Anti-Malaria Drug

Here she is in front of the Main facade and dome of St. Peter’s Basilica

A post shared by Priyanka Chopra (@priyankachopra) on Oct 8, 2017 at 5:23am PDT Also Read - Naples' Humanitarian Work of 'Supportive Basket' For Homeless Inspires Twitterati as Italy Struggles to Contain COVID-19

And here is Miss Chopra in front of the Castel Sant’Angelo Roma, once the tallest building in Rome

At the Roman Colosseum and, of course, she gets the best seats in the house

And she stands with her friends, the ancient Roman Pantheon behind her

Interestingly, the original Pantheon burned down and was later rebuilt by Roman emperor Hadrian, who kept the original inscription that you can read behind. The first temple was built by Marcus Agrippa when emperor Augustus reigned over Rome. This isn’t Priyanka Chopra’s first rodeo, obviously. The actress, who was last seen in the summer flick Baywatch, has been raking in airline miles and flying all over the world these past few years. Here’s a look at some of her other recent adventures.

Here she is in Paris, of course

And here she poses in Prague, at the famed Charles Bridge over the Vltava river

The daughter of army doctors, she’s been traveling ever since she was six months old, and she loves every minute of it. As she puts it herself, she was ‘born to fly’. And these photos clearly show a love for travel and exploration, which is something we all definitely relate to. NOW READ: Priyanka Chopras stunning beach vacation photos will sweep you off your feet!

You’ll be seeing a lot more of Priyanka Chopra soon. She just finished shooting for A Kid Like Jake with her Homeland costar Claire Danes and Jim Parsons from Big Bang Theory. She will also be seen in Isn’t It Romantic with Pitch Perfect actress Rebel Wilson. Back home, she will be producing a bunch of films, including a biopic on astronaut Kalpana Chawla that she will also star in.