Kabali fever sweeps through the city. 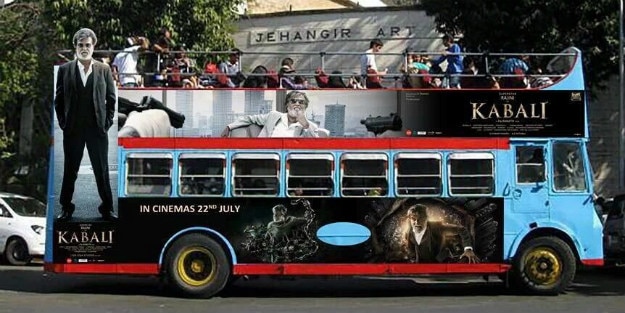 Kabali released today and only Rajinikanth can weave a magic like this. It is not just in Tamil Nadu that you can withness the Kabali craze, but the entire country is reeling under the magic. Many companies in Tamil Nadi and Karnataka have declared a holiday on the occasion of the release of Kabali. Also Read - COVID-19 Bodies to be Sent to Mortuaries Within 2 Hours, Delhi Govt Issues Additional Guidelines

To cash in on the film’s craze, FoxStar Studio is using unique strategies for the promotion of the film. After partnering with AirAsia to promote Kabali on their aircraft, the studio surprised the Rajinikanth fans in Mumbai with a Kabali bus ride. Also Read - Coronavirus in Delhi: Delhi Police ASI Dies of COVID-19, Second Casualty in Force

Sporting the Kabali poster, the open-air double deck bus with a loudspeaker took Rajinikanth fans, who were wearing Kabali masks and t-shirts, on a ride through the streets of the city. The journey started from Wadala bus depot and ended at InOrbit Malad.It halted at important junctions like the 74-year Aurora theatre in Matunga, Bandra Linking road and City Mall Andheri, where the fans danced to the soundtrack Neruppu Da from Kabali. Graffitis of Rajinikanth were also painted by Thalaiva fans.

ALSO READ Heres why you must watch Rajnikanths Kabali at Mumbais Aurora Theatre!

The movie Kabali, which also stars Winston Chao and Radhika Apte, released today. The early morning shows started as early as 3 am at Aurora theatre but guess what the theatre has recorded full bookings. Rush to your nearest theatre to witness the fan frenzy.

Now read Kabali madness: This is how Aurora in Mumbai welcomed Kabali!