Rio de Janeiro Has the Largest Graffiti Mural in World

The city of Rio de Janeiro is home to the world's largest graffiti mural every created by one person, created by artist Eduardo Kobra to coincide with last year's Olympic Games. 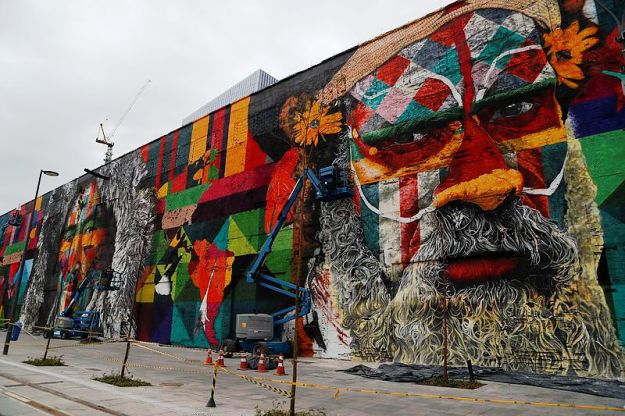 The Olympic Games are a matter of pride for any athlete; just being a part of it signifies that you are in the elite. And the same goes for the host city too. Every host city works hard to present the best image of itself to the world. Rio de Janeiro did the same too. But like with other host cities, all the shiny bits have faded away since then. Just six months after the 2016 Olympic Games, the Olympic Village and many venues were abandoned. But now, even a year after the tournament, there are a few remnants worth seeing. One of them is the world’s largest mural to be made by one person, and it lies along the wall of the city’s port. ALSO READ: 5 reasons you absolutely must visit Rio de Janeiro! Also Read - Mask Projected Onto Face of Christ The Redeemer Statue in Rio to Raise Awareness About COVID-19

The mural, titled ‘Etnias’ or ‘Ethnicities’, was created by Brazilian street artist Eduardo Kobra specifically for the Olympic games. He made the mural on a 190-meter long wall. The resulting work stretches out across nearly 3,000 square meters, and revolves around the theme of togetherness. Kobra used around 100 gallons of white paint, 3,500 cans of spray paint, and 1,500 liters of colored paint for the work of art, spending 12 hours a day for two months. Also Read - Newborn Stares Down Doctor Minutes After Coming Into The World, Leaves Netizens Amused

The painting forms a big part of the Olympic Boulevard, the renovated site of the run-down port where live music, nightly fireworks and large screens were seen during the Olympic games. It is a fitting tribute to the street art culture of the city, something that many people either don’t know about or don’t want to. The work depicts five faces from five continents. There is a Brazilian Tajapo boy, an Ethiopian Mursi woman, a Thai Kayin woman and a Northern European Supi man, along with a Huli man of Papua New Guinea. They are the common ancestors of humankind, the indigenous people from whom the rest of us came from. They also represent each of the five colors of the rings that form the Olympic flag. NOW READ: 10 best places to visit in Rio de Janeiro Also Read - 'Wonders of the World' Park opens for public; SDMC mulling lending it for film shoot

Kobra initially planned to name the mural ‘Todos Somos Um’ or ‘We are one’. The work, commissioned the International Olympic Committee, is two times the size of the mural that previously held the same record. That one was an 18,000 square-foot mural by artist Ernesto Rocha in Mazatland, Mexico. Kobra’s work was completed just before the Olympic Games began. The artist’s work can be found in other parts of the world as well, including New York, Amsterdam, Tokyo and London.