The UAE flight was full of falcons and made for an interesting sight. 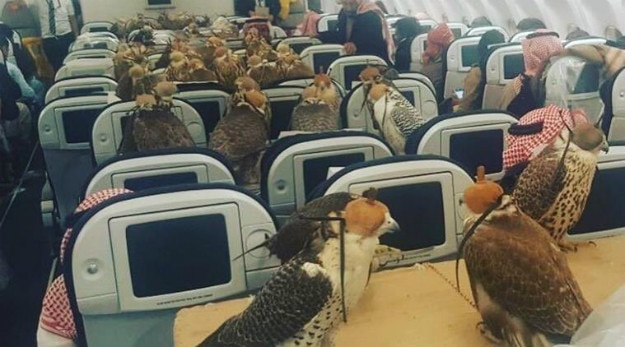 Whether these birds wished it or not, their master, a Saudi prince in the Middle East, bought plane tickets for 80 of his pet falcons. Yes, you read that right, there was a plane full of falcons as the prince did not want to cause any inconvenience to his birds. Belonging to the royal family, the prince made sure his pets too traveled in utmost comfort, just like him. It was a Reddit user who shared a photo of the plane filled with falcons on a thread and soon the photo began to go viral. User Lensoo said in his thread that the photo was sent to him by his pilot friend who probably was equally amused at this sight. Also Read - Are Sanitary Napkins Not 'Essential' Enough to be COVID-19 Lockdown Exception?

However strange this may look or sound to us, the fact is, falconry is a popular sport in the UAE and having them as pets is not at all uncommon. In fact, many Middle Eastern airlines are prepared and allow pets like falcon to fly on board along with passengers. These falcons are also issued a passport for a period of three years and have to wear a ring with their number around their leg. This practice is followed to prevent their smuggling which too is common. The passport allows them to travel to other countries as well including Kuwait, Bahrain, Oman, Qatar, Pakistan, Syria, Morocco and Saudi Arabia. Also Read - Reel Life Ram Arun Govil Watches Ramayan Along With His Grandchildren, Picture Goes Viral

Falcons are UAE’s national birds too. In fact, according to reports, about 28,000 passports were issued to falcons from 2002 to 2013. Now that we know these facts, this doesn’t look so bizarre. However, we are sure like us, most of you are envious of the royal treatment these birds got. Did you know Dubai also has a high-end hospital for falcons!? Such is life! Also Read - Over 19 People Killed in Massive Forest Fire in China’s Sichuan Province