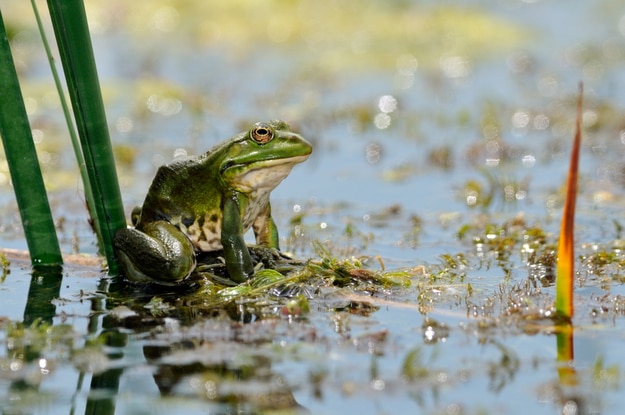 Valentine’s Day is a celebration of love and passion. But while couples out there celebrate their love in all kinds of mushy ways, there still are single people out there, and frogs too. Romeo is a Sehuencas water frog in the Cochabamba Natural History Museum, Bolivia. And he is looking out for his Juliet, hopefully minus the tragic ending. There is good news and bad news, though. The good news is that family feuds are unlikely to come in the way of Romeo and the Juliet he awaits: he is presumably the only surviving Sehuencas water frog right now. That is also the bad news. ALSO READ: Valentine’s Day 2018: Where to Go in India If You’re SingleAlso Read - Man Puts Steel Ring on His Penis to Make it Bigger to Impress Girlfriend, Lands in Hospital As Metal Gets Stuck

Romeo’s dating profile reads, “I’m a pretty simple guy. I tend to keep to myself and have the best nights just chilling at home, maybe binge-watching the waters around me. I do love food, though, and will throw a pair of pants on and get out of the house if there’s a worm or snail to be eaten!” His preference is for females between two to three inches tall and is okay with drinkers but not smokers. But honestly, at this point, he should be fine with just about anything. Also Read - Valentine's Special: Shraddha Kapoor Delivers A Special Valentine's Day Message For All Her Fans!

All jokes aside, Romeo’s plight is an important one. The profile links to the campaign donation page that it is part of, with an aim of raising USD 15,000 to search for more Sehuencas water frogs. And Match.com is doing its part by matching all donations made from February 9 to today, Valentine’s Day. NOW READ: Valentine’s Day 2018: Best Places Near Delhi for Last-Minute Valentine’s Getaways this Weekend

Approximately half of all amphibian species are in decline due to what some scientists call the sixth mass extinction. One third of all amphibians face extinctions. Water pollution, habitat loss and a disease called Chytridiomycosis have nearly wiped out the Sehuencas water frog. Romeo remains, and scientists hope to keep the species around by finding a mate for him.