Shabir Ahluwalia and Kanchi Kaul Are Living Up Their Game of Thrones Fantasy in Croatia! VIEW PICS

TV actors Kanchi Kaul and Shabir Ahluwalia are enjoying a holiday in Croatia, adding in a little Game of Thrones sightseeing along the way. And they have been kind enough to put up their fun holiday photos on Instagram. 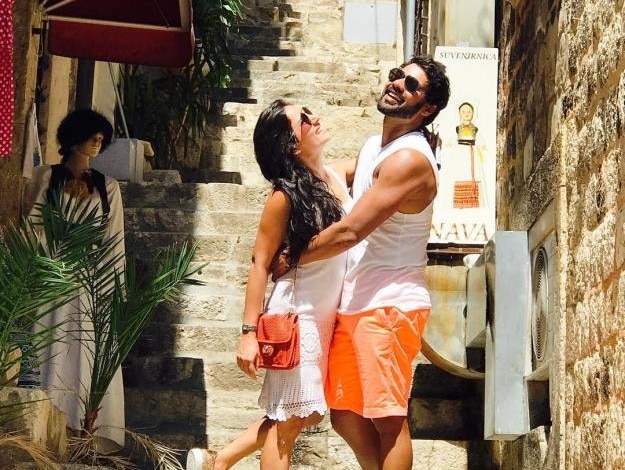 Shabir Ahluwalia and Kanchi Kaul, two Indian television actors who became very popular thanks to their roles on the small screen, married each other six years ago. They now have two kids, Ivarr and Azai, but that hasn’t put a full stop on their travel goals. The two travel bugs can be seen spending quality time with each other and with their kids all over the world. Earlier this year, Shabir and Kanchi were in the Maldives, scorching it up by the sun, sea and sand. And now, the two are out exploring beautiful country of Croatia. Here are some pictures of them enjoying themselves in the land of a thousand islands. Also Read - Game of Thrones Actor Kristofer Hivju Aka Tormund Giantsbane Has Coronavirus, Read His Long Post

And it looks like the two TV actors took the opportunity to get a taste of the television phenomenon that is Game of Thrones. Croatia offers tours through famous shooting locations of the TV series, which is currently in its seventh season. Based on their photos, Shabir Ahluwalia and Kanchi Kaul seem to have gone out on one or more of these tours; you can see the famous Iron Throne and other places like Dubrovnik Castle, which doubles as King’s Landing in the TV series. Croatia is home to several places that serve as fictional regions in Game of Thrones. The island of Lokrum, for instance, is the setting for Qarth. Interestingly, Shabir Ahluwalia and Kanchi Kaul also visited the island during their travels. ALSO READ: You Can Walk The Steps of Dragonstone from Game of Thrones in Spain Also Read - "Priyanka Chopra is The Biggest Thing in India," Says Sister-in-Law Sophie Turner

Shabir and Kanchi soak up the Croatian sun

The two enjoy an evening out in Takenoko, Dubrovnik

Shabir cooling down in the pool in Croatia

That’s him looking out from Dubrovnik Old Town

And here is Kanchi in the same place, which served as King’s Landing in Game of Thrones

She also got to claim the Iron Throne for herself!

The two enjoy a meal with friends in Dubrovnik

And here they are, on a cruise along the Adriatic Sea

Looks like they are having a blast in Croatia!

Shabir Ahluwalia has been a hit on the screen ever since he debuted more than 15 years ago. He holds a massive fan following, especially since he won the lead for the popular television show Kumkum Bhagya. The man has also won fans for his pleasant and warm off-screen personality. With his wife, Kanchi Kaul, and two kids, it is a perfect family portrait. The two are no strangers to showing their love for each other on social media, and it is heartwarming to see them so in love with each other even after the years. Here’s hoping that they have even more fun-filled holidays with each other and with their children.