Sonam Kapoor and Anand Ahuja are gracing the streets of New York City with their presence, enjoying everything that the city has to offer. From riding bicycles to eating burgers and doing Pilates, they are having the time of their lives. 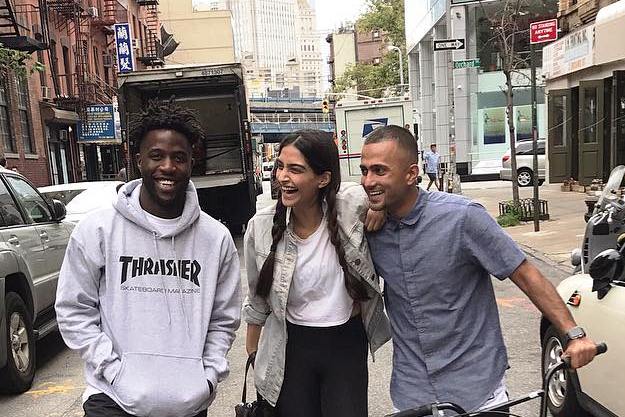 Actress Sonam Kapoor, last seen in 2016 in the phenomenal Neerja, is also quite a travel bug. The 32-year-old, famous for her fashion, philanthropy, personality and lineage, was last seen holidaying in Sri Lanka with her gal pals, including sister and film producer Rhea Kapoor. She has also been to the snowy little resort village of Altaussee in Austria. And now, Miss Kapoor is vacationing in the Big Apple itself. But what makes her trip to New York City so special is the company and the occasion; she is with her rumored beau, businessman Anand Ahuja, for his birthday. Also Read - Sonam Kapoor, Hrithik Roshan Express Their Happiness as BMC Announces 2 Positive Cases 'Recovered'

Here they are, enjoying an easy walk on New York’s streets

A post shared by anand ahuja (@anandahuja) on Jul 23, 2017 at 11:40am PDT Also Read - Here's The Truth Behind Sonam Kapoor Ahuja's Pregnancy Rumours

Sonam Kapoor strikes a pose by the road

And here she explores the historic Greenwich Village of the city

And she turns her back, taking the colors with her

The two show off their sneaker game in East Village, Manhattan

Miss Kapoor has a relaxing cuppa in Greenwich Village

But she doesn’t forget her workout, even on a vacation!

And neither does Ahuja miss out on shooting some hoops

The two of them are clearly having the time of their lives, and Sonam’s gifts are just the icing on the cake. And we have to say, the two of them make for a perfect fit in the city. New York City is a fusion of fashion, style and culture, and the two of them seem like a perfect embodiment of all of that. You’d be hard-pressed to find a cuter way to explore the Big City than these two crazy cats. Here’s hoping that their vacations together never end!