Imagine a secluded island with lush blue waters, sandy beaches, exotic looking rocks seemingly molded by the hands of God and a dearth of tourists: a scene from a blockbuster featuring a swashbuck

Imagine a secluded island with lush blue waters, sandy beaches, exotic looking rocks seemingly molded by the hands of God and a dearth of tourists: a scene from a blockbuster featuring a swashbuckling pirate seems to come in mind. What if we told you that you could find all of the above, and that too in India? Also Read - Horoscope Today, March 3, 2021: Relaxing Day For Aries, Pisces to Get Appreciation at Work

The St. Marys Islands are a group of islands off the course of Karnataka, a mere 20 minutes journey by boat from Malpe Beach, with one of these islands being famous for the curious basalt rock formations which dot its shore. This island is known by the locals as Saint Marys Island or Coconut Island, and is a serene island to which daily ferries come to and fro. Also Read - UPPCL Technician Admit Card 2021 Released At upenergy.in, Check Direct Link And Other Details Here

The basalt on this island has been shown by scientific study to have formed by volcanic activity, a completely rare occurrence, proving that India was at one point of time attached to Madagascar. The rift between India and Madagascar took place around 88 Million years ago. Also Read - NEET 2021: Indian Army Offers Free Coaching to Underprivileged Students in Srinagar

Famous in geological circles and among locals living near Malpe and Udupi, the Saint Mary Island is a relatively lesser-known holiday destination perfect for a day trip with some friends if you are near the Malpe beach.

Although influx of tourists and disregard by the locals has resulted in the shoreline of the island to be littered, Saint Mary Island is one of those destinations that is still to be ravaged and commercialized, as can be observed by According to local legends the island was discovered by Vasco De Gama in 1498, before he reached Kozhikode, who fixed a cross on the island and named it El Padron de Santa Maria, after Mother Mary. 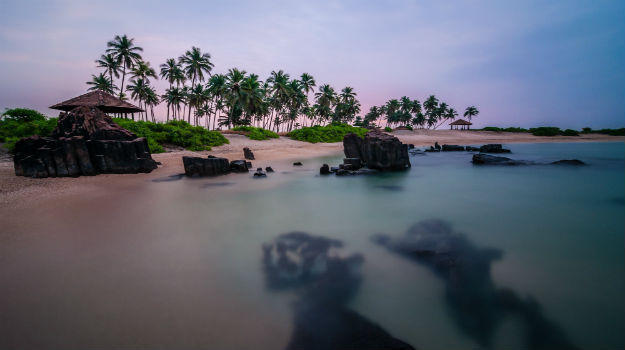 A ferry from Malpe beach takes around Rs. 150 and although it is generally crowded, one is sure to enjoy a breathtaking view of the Indian Ocean on the short sail to the island. The boat, which ceases to operate in the monsoon season, runs from 10 am to 1:30 pm from Malpe Beach.

The nearest airport to St. Marys Island or Coconut Island is in Mangalore, which is around 60 kilometers away. Malpe beach has an abundance of places to stay, having both luxurious and budget accommodations. Paradise Resort is a popular place to stay, having a picturesque view of the beach.

Saint Marys Island is one of the last remaining places in India which is abundant in natural beauty, being a popular spot for birdwatchers nation-wide and having colonies of butterflies all across the island. Head down to the beautiful island for a fun filled afternoon; you will not regret it!