Sulabh International Museum of Toilets: Exploring the history of hygiene

Toilet: Ek Prem Katha highlights the importance of hygiene in an entertaining way, but there is another place in New Delhi that does the same: the Sulabh International Museum of Toilets. Visit this unique museum to learn some fascinating things about the evolution of toilets from then to now. 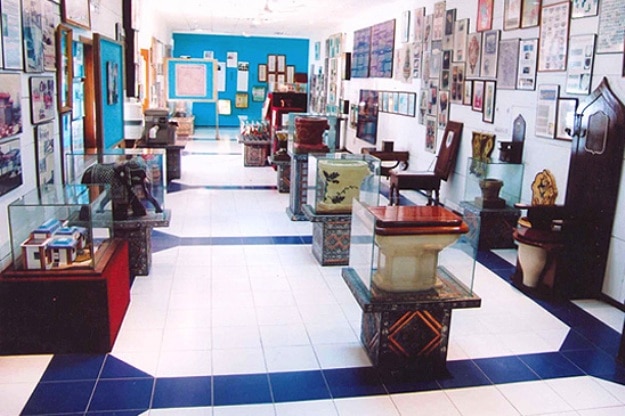 Film star Akshay Kumar’s upcoming movie Toilet: Ek Prem Katha shines some much-needed light on an important issue in India: the lack of toilets and the dangers of open defecation. Toilets are important; that is not a fact that is up for debate. Open defecation and poorly maintained public toilets can cause a range of problems, including major diseases like typhoid, salmonellosis, tuberculosis and bacillary dysentery. Unfortunately, the issue has often been skipped. The 2011 census found that 53 percent of the Indian population did not have access to a toilet, rising to around 69 percent in rural India. Thankfully, recent years have seen improvements. And if you are interested in learning more about the fascinating history of toilets, head to the Sulabh International Museum of Toilets in Delhi. ALSO READ: Toilet Ek Prem Katha shooting location Hoshangabad is a place Akshay Kumar calls cleaner than Mumbai
Also Read - From TV to Mobile Phones, Locals in Bhopal Villages Get Rewards For Ensuring Cleanliness at Their Homes & Surroundings

Operated by Sulabh International. the museum is located in the Sulabh Bhawan building along Mahavir Enclave. You can reach the place via Metro by getting off at the Dwarka Sector 10 metro station (part of the Blue Line), and there are plenty of buses to Mahavir Enclave as well, despite being far from the heart of New Delhi. Possibly the only museum of its kind in India and the world, this place makes for a fascinating visit, especially considering the huge sanitation problem in our country. The museum is relatively small, but is full of some some rather interesting exhibits. Also Read - Kabir Singh Writers Siddharth-Garima Speak on Need of Feminist Writing, And a Nepotism-Free Industry | Interview

There is, for instance, a replica of the throne-cum-toilet used in the court of King Louis XIII of France. The king would often do his business while going about his royal tasks. When nature would call, he would simply lift the base of the throne to access the commode. There is also an exhibit of the oldest large-scale sanitation system in the world, and images of remains of the Indus Valley civilization, which is known to have used a relatively simple but effective sanitation system consisting of brick commodes connected to a complex drainage network. Also Read - BJP Seeks Permission to Air Two Akshay Kumar Films on NaMo TV, Delhi Poll Body Turns to EC

And there are more modern examples in the outer courtyard, including a public toilet connected to a biogas generator and waste water treatment system. The biogas generator turns the waste into fertilizer and energy. There are also models and machines developed by Sulabh International, including one that looks like an Indian toilet but requires just one-sixth of the water usually required to flush the waste. Moreover, the toilet deposits the waste into pits where the gases and liquid can escape and the solid waste can decompose quickly.

Sulabh International has, in fact, contributed quite a bit towards addressing the issue of sanitation in India. It has built thousands of public toilets and millions of smaller toilets similar to the ones seen in the museum. It also operates training centers for toilet cleaners to upgrade their skills and gain better work. NOW READ: 7 ridiculously funny toilet signs from around the world