Switzerland honors Yash Chopra with a statue: 5 YRF songs that captured the beauty of Switzerland

Switzerland owes its popularity among Indians to Yash Chopra for the number of films shot here. And the country paid him a fitting tribute. 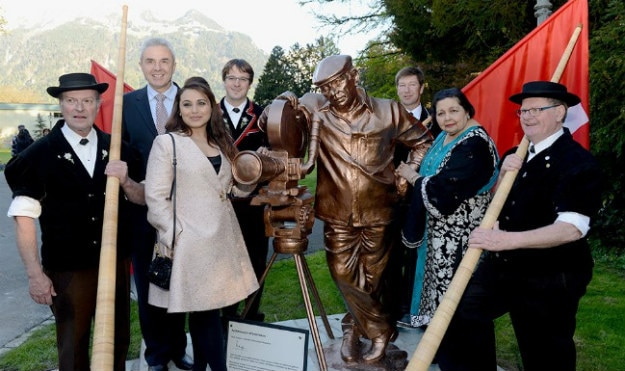 Bollywood’s love affair with Switzerland goes well back in time. Thanks to being featured in several films, Switzerland became the most popular destination in Europe for Indians especially for honeymooners. The snow-capped Swiss Alps, the lush greenery and the beautiful locales stole our hearts as we saw couples create magic onscreen in Switzerland. Yash Chopra who loved the destination, shot many of his films in this country. And the country too loved him for that. Recently, the Swiss Government unveiled a bronze statue of Yash Chopra to honor him for this work. The late director’s daughter-in-law Rani Mukerjee and his wife Pamela Chopra were present to inaugurate the statue. It is installed at Interlaken, inside the Kursaal area which is a popular tourist spot. Also Read - Delhi Secretariat Department Sealed as Official Tests COVID-19 Positive

Yash Chopra loved the country and shot several films here to capture its beauty on the silver screen. And for many Indians, that’s what sparked their wanderlust to see its mesmerizing beauty for real. No wonder there are special Bollywood and Yash Chopra tours that take you to the exact locations where many films have been shot. This isn’t the first time the Interlaken Government has bestowed its love on Yash Chopra. The legendary director was honored with the title of Ambassador of Interlaken in 2011. There is also a train named after him by Jungfrau Railways and a five-star resort in Interlaken also has a suite named after Yash Chopra. Also Read - How Kiran Kumar Beat COVID-19 at 67: Social Distancing is Necessary, Not Social Boycotting

ALSO SEE How to get a visa for Switzerland

Yash Chopra is most remembered for his magical love stories that were passionate and had some of the most romantic songs shot most likely in Switzerland. We take a look at some of the most memorable numbers shot here by Yash Raj Films.

Who can forget this iconic film and its songs! One of Yash Chopra’s most popular films, many parts of DDLJ were shot in Switzerland. The song Zara Sa Jhoom Loon Main was picturised in Gstaad, a tiny alpine village in the country. Watch this melody and relive the SRK-Kajol romance once again.

This song featuring Ranbir Kapoor and Minishaa Lamba screams Switzerland in every shot. From riding a Vespa on Swiss roads to having fun on its snow-capped mountains to dancing in its streets against the beautiful backdrop of Swiss houses and cafes. Watch it to relive these moments.

This song opens with a beautiful shot of Shah Rukh Khan and Aishwarya Rai in an embrace atop a mountain in Switzerland. And from here onwards you see some of the most stunning locations of this country. We bet you’d want to go to Switzerland after watching this video.

This one was one of Yash Chopra’s favorite songs and was shot in the beautiful locals of Switzerland. You’ll get a bird’s eye view of its scenic beauty as you see Shah Rukh Khan and Preity Zinta romancing each other.

Madhuri and SRK-starrer, Dholna song was also shot entirely in Switzerland. You’ll see its green landscapes throughout the song as the lead pair romance one another. A dream sequence in the film, this song is indeed an ode to the beauty of Switzerland.