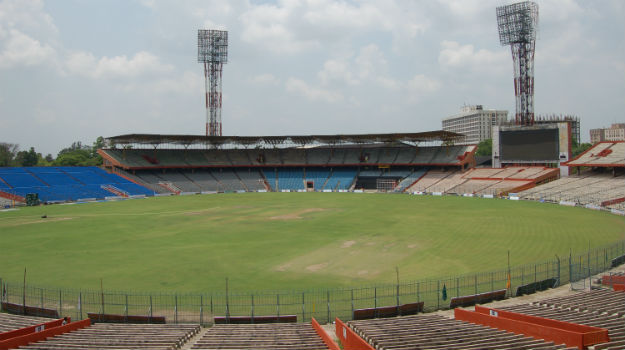 Come April 3, an expected full house of 65,000 would scream their lungs out in the World Twenty 20 final at a greener and prettier Eden Gardens, with a revamped drainage system which promises to rid the iconic cricket venue of its perennial water-logging problem. Also Read - West Bengal News: Week After Cyclone Amphan, Kolkata Hit by Gusty Winds, Downpour

Every cricketer who has played at the Eden agrees his cricketing experience would have been incomplete without a game at this ground. Many say it is cricket’s answer to the Colosseum, the historic ampitheatre in Rome. Also Read - West Bengal: Cyclone Amphan Damages World's Largest Banyan Tree in Howrah Botanical Garden

The stadium held its maiden Test match — only the second on Indian soil — in 1934 as India took on England. Eden’s crowning glory came in 1987 when it hosted the World Cup final that was won by Australia before a 95,000-strong crowd.

Ex-Bengal captain Raju Mukherjee, who has authored a book on the historic venue, says greatness of Eden Gardens lies in the people who come to watch.

“The beauty of Eden lies in its crowd and the turf. It is the crowd that draws the biggest cricketers from the world over. They have reduced the capacity considerably from 100,000 to 65,000 now, but it is still a massive crowd and together they can take the roof off,” Mukherjee told IANS.

However, eyebrows were raised when the International Cricket Council (ICC) announced that Eden would host the final of the World Twenty 20. It has been a historic venue no doubt, but what if it rains?

And the doubting Thomases did have a case.

On two previous occasions when it rained in the city on match days, games at the Eden Gardens were washed out.

In the Indian Premier League (IPL) edition eighth match between Kolkata Knight Riders and Rajasthan Royals as well as the T20 international between India and South Africa last year in October, not a ball could be bowled.

But the Cricket Association of Bengal claims rain can no more play spoilsport. With its new president Sourav Ganguly leading from the front, the CAB mandarins have been working overtime to better the drainage system.

“We had brought in a company from Delhi to look into the problem of ground water-logging.

“Then we followed instructions of (BCCI pitch curator) Daljit Singh and we worked as a team with Ashish Bhowmick (East Zone curator), Sujan Mukherjee (Eden Gardens curator) and me. We did the deep coring which was of prime importance.” CAB ground committee head Debabrata Das told IANS.

“If it rains for even four hours now, the water will drain out in 20 minutes. Only a flood can stop Eden Gardens from having a game,” assured Das.

The last time, when rain hampered play here, the then pitch curator Prabir Mukherjee had stated that there weren’t enough covers to be laid across the ground. But now, over four months after the debacle, Eden is equipped with all the modern amenities.

“We have brought in machines which can absorb water that is left on the pitch cover. We have all the modern equipment which are necessary now, including zero-point grass cutters and four super soppers,” Das stated.

“We also now have a brand new pitch cover which is inflatable and can be rolled up easily. Modern see-through ground covers are also on their way,” he added.

However, Mukherjee struck a note of caution. “Can man fight nature? No stadium in the world can say we are 100 percent equipped to handle heavy rain. Do you know One-Dayers were invented because Test matches were being rained out?”

ALSO READ 9 interesting facts about the Howrah bridge you certainly need to know!

On the outfield, the difference is all visible. Sprinklers were watering the ground just as in hockey fields. The ground never looked greener. Workers were busy painting the steel and iron frames around the ground.

“We have looked into every nook and corner of the field. We are working under the supervision of Sourav Ganguly. He is deeply involved in all the work that is being done. There is no scope for a mistake,” said Das.

The ground has also got a brand new electronic scoreboard and giant screen. Outside, just on top of the main entrance, two huge pictures have been put up.

It was 29 years back that Eden hosted a world Cup final. CAB joint secretary Anu Dutta insists the stadium is ready for the big day.

“Yes, we have got a few changes here and there.We will be putting up the scoreboard in a few days’ time. But rest assured, we are ready for hosting the matches of the World T20,” Dutta said, referring to the final and the three other WT20 games slated to be played on Eden’s hallowed surface.