Taipei Metro Train Car Now Has A Swimming Pool And People Are Loving It!

Taipei has turned a six-car metro train into venues for six different sports to celebrate its hosting of the Universiade 2017 games. One car has been turned into a swimming pool, and others into a basketball pitch, baseball field, football field and running track. 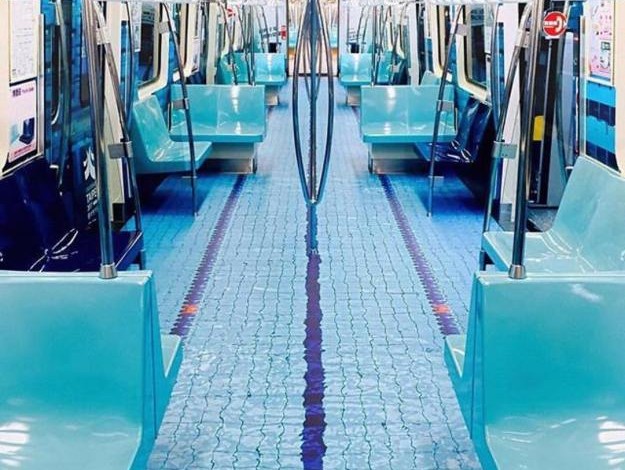 In 2011, the city of Taipei, Taiwan was selected as the host for the 2017 Summer Universiade, a major multisport event that will see university athletes compete with each other. This is the second-largest multisport event in the world, after the Olympics. Naturally, Taipei is proud of hosting such a prestigious event, which has been going on since 1959. And to show its pride and commemorate the event, the Taiwanese capital decided to redecorate one of the six-car local trains that runs through the city. ALSO READ: Top 10 Asian destinations on the rise that you must visit in 2017
Also Read - 5 Best Instagrammable Experiences to Have in Asia in 2019

The train has been redesigned to feature 3D artwork of sporting venues that will be used in the upcoming games. These include a field for throwing games, a running track, a baseball field, a basketball court, a football field and a swimming pool. And the new artwork is making everyone excited. The swimming pool especially is drawing plenty of reactions. Many of them are coming into the train with their swimsuits to take some cheeky photos of themselves diving into and swimming on the ‘pool’. Other commuters are, thankfully, letting them take these photographs, according to Facebook user Luo Yusheng. Also Read - China Urges US to Withdraw Arms Sales, Sever Military Ties With Taiwan

According to spokesperson of Taipei’s Department of Information and Tourism, the new artwork inside the train will spread awareness about the sports venues and the event itself among people who were not really aware of it all. The department also hopes that this will bring the common public closer to sports and encourage them. NOW SEE: Taiwan is a hidden gem with loads to offer to Indian travelers!

The swimming pool-themed car is getting the most reactions, though, with athlete Hsu Tzu-Hsiung also taking part and taking a couple of photos in swimming gear next to the artwork. He represents the country in several water sports tournaments, and said that this initiative could raise awareness of sports among the general public in a fun way and get them to participate in the games. The train runs on the Songshan-Xindian MRT Line and will be seen until the end of the tournament, which runs from August 19 to 30, 2017.