Sri Lanka's Jaffna Public Library was gutted in a fire in 1981. It is now rebuilt, and Tamil Nadu is helping revive its collection. 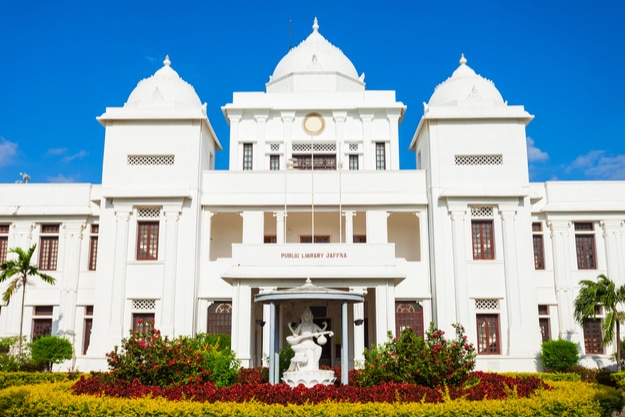 Jaffna Public Library is located in Jaffna, Sri Lanka. It is one of Jaffna most notable landmarks

In 1933, a modest building in the city Jaffna was built to host a private collection of books. Over the years, local citizens and others contributed to the collection, and the majestic Jaffna Public Library came to be. The library was known for its remarkable colonial architecture, but more so for its contents. It had archival material from centuries ago, palm leaf manuscripts and the original copies of major historic documents. It was a place of symbolic and historic importance for all Sri Lankans. But it was tragically burned down in 1981. Today, it is being renovated, and Tamil Nadu is helping restock its shelves. ALSO READ: Sri Lanka travel and tourism: 21 things to do in Sri Lanka Also Read - Desperate For Alcohol Amid Lockdown, 3 Men in Tamil Nadu Die After Drinking Paint Varnish

In Tamil Nadu’s capital city, Chennai, the Directorate of Public Libraries is preparing to send a collection of Tamil language books as donation to the Jaffna library. Some of the books in the collection include the Tolkappiyam, the ancient book on Tamil grammar. The literary classics Pathupattu and Kurunthogai are also included. And just like the original library’s collection, this collection too is the result of donations by the people. The government is running a state-wide drive to collection donations by people to replenish the books that were burnt down with the Jaffna library. The target is to get 100,000 books. Also Read - Fire Breaks Out in Chennai as People Burn Crackers in Response to PM's Call, No Deaths or Injuries Reported

The initiative began on October 24, 2017 and S Kanappan, the director of public libraries in Tamil Nadu, hopes to collection at least half the intended target by the end of the year. The government said that rare documents and books on Tamil culture will be sourced from private institutions, colleges and schools, and given to the Jaffna library as well as Malaysia’s University of Malaya. It plans to collect rare palm leaf manuscripts and books as well as contemporary works on Tamil grammar, culture, religion and literature. The aim is more than just handing over books: it is to mobilize the Tamil people for the noble cause of restoring the library and building friendship with Sri Lanka. Also Read - Doctor Feeds Food to Coronavirus Patient in Absence of Family, Photo Goes Viral

The Indian government has donated books to the renovated Jaffna library before. It gave out 15,000 books on Indian culture, literature and geography in July. The library even opened an ‘Indian corner’ in 2015, collaborating with the Indian High Commission. As for the current drive, around 1,000 books have been collected so far, and the Tamil Nadu Teachers Education University has promised 10,000 books.

At its peak, the Jaffna Public Library was one of the biggest and most important libraries in Asia. It had more than 97,000 manuscripts and books, including the only copy of the Yalpana Vaipavamalai, detailing the history of Jaffna. In 1981, however, a mob burnt down the library. The event played a key role in triggering the bloody Sri Lankan civil war that ravaged the country. The library was eventually rebuilt in 1994 and rehabilitation completed in 2001. Two years later and six years before the civil war ended, it opened to the public. NOW READ: India vs Sri Lanka: Which country has the best beaches?

Since then, efforts on a global scale have been underway to replenish the knowledge that was lost. A digital library of more than 16,000 documents was made in 2005, and this effort by the Tamil Nadu government hopes to contribute some more to the ongoing reparations.