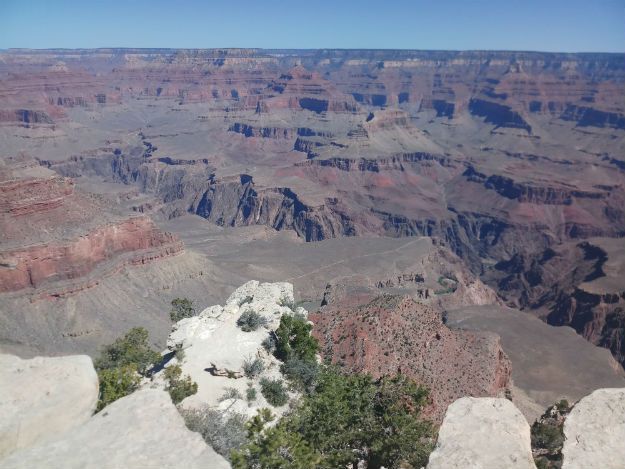 Here I was standing overlooking centuries of ancient history at one of the seven natural wonders of the world. Painted in the bright hues of orange, brown and green with the Colorado river flowing beneath it, even time stands still at the Grand Canyon. ALSO SEE 10 Astonishing Photos of Grand Canyon National Park That’ll Blow Your Mind Away Also Read - 'Bible is Not Prop...God is Not Your Plaything': Religious Leaders Slam Donald Trump For Tear-Gassing Protestors Before Photo op Outside St. John’s Church

I started my journey to the South Rim of this majestic wonder from a city called Sedona located in Arizona’s Red Rock, to a small little town called Tusayan. The South Rim is the most visited side of the Grand Canyon and is open to the public 12 months a year, while the North Rim which has the famous Antelope Canyon and the Horse Shoe Bend, remains closed in the winter and opens for tourists from May. Also Read - 'Daddy Changed The World': George Floyd's Daughter Gianna 'GiGi' Floyd Proudly Tells Former NBA Star Stephen Jackson | WATCH

To experience the Canyon, one can either opt for a helicopter, choose the Pink Jeep services, stay at a lodge inside the park or can either hike or cycle around.

I opted for the Pink Jeep service, which begins from the National Geographic Grand Canyon Visitor Centre in Tusayan. The drive is about 20 minutes. Also it is advisable to carry food supplies, water and a light jacket.

The 443 km-long Grand Canyon’s story began over 1,800 million years ago as volcanic island chains collided with a young, developing North American continent. The collisions were violent. After the rocks cooled, the core of the mountains were exposed as a hard rock plain under a mantle of mineral soil. Thus, the foundation of the Grand Canyon was laid.

The Colorado river made its way through the Canyon only some five million years ago. It carved its way down towards sea level triggering erosion and carrying debris to the river’s delta in the Gulf of California. One can taste the water at various springs located throughout the park area.

The flowing of the river did most of the Canyon’s carving.

It receives all four seasons in a year although rainfall and snow have reduced over time due to global warming.

The drive to the Canyon was full of information provided by our jeep’s driver, William, a full-blooded Hopi Native American. The Hopis were one of the first settlers in the Canyon.

“Our tribe came here thousands of years ago and have been here ever since,” said William whose Hopi name is “Sohveymah” meaning the Milky Way Galaxy.

Besides the Hopis, the Navajo, Havasupai and the Yavapai tribes also settled in and around the Canyon.

According to modern day anthropologists, the native people arrived in the North American continent via the Bering Strait in Asia some 150,000 years ago.

“We are the oldest living culture in the Americas. Even after so many years, we keep our own records and know exactly where we come from. We were brought here by divine guidance,” William added.

There are currently about 13,000 Hopis in Arizona.

To experience the Canyon first hand, I took a short hike down the Hermit’s Trail, one of the five hiking trails in the South Rim. Going down the trail is quite easy in the beginning, but it gets steeper and rockier. The trail starts at Hermit’s Rest and ends at Santa Maria Spring with a natural water pool and waterfalls. A word of advice: It would be best served to wear hiking shoes and apply loads of sunscreen lotion.

The rocks lining this trail are full of fossilised shells of various extinct sea animals as this area was under water before the Canyon rose. One needs to pay full attention to their surroundings while hiking. Clicking pictures while walking is a no-no as danger lurks at every step. According to park data, one person reportedly falls to his/her death every two months.

Flora and fauna thrives in this area. The vegetation includes drought-tolerant plants as well as a mixture of evergreens and desert plants. Pinion pines, yuca juniper, banana yucca and some 15 different species of cacti are found here. Animals include the elk and mule deer, bobcats, rattle snakes, cottontail rabbit, different species of birds and even mountain lions.

I ended my visit with a 40-minute IMAX film on the Canyon and lunch at the National Geographic Grand Canyon Visitor Centre.

No matter how many books one reads or films one watches about the Grand Canyon, true justice is done only when one personally witnesses this natural treasure trove of ancient history. In that, I was doubly lucky.

(Karishma Saurabh Kalita’s visit was sponsored by Brand America. She can be contacted at karishma.k@ians.in)