The Haunting Real-life Story of a Ghost Town Called Dhanushkodi

After the disaster that destroyed it years ago, Dhanushkodi lives to tell the tale. 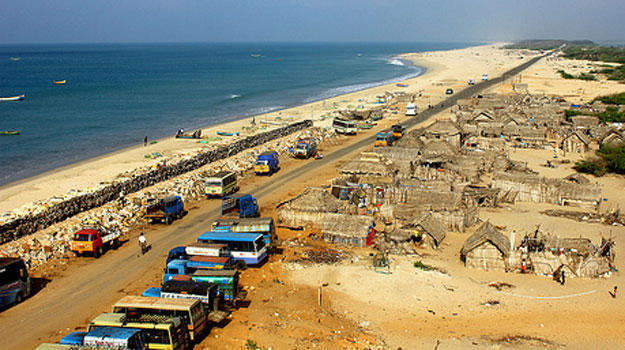 It was the 21st of December, 1964, when disaster hit the little port town of Dhanushkodi and swallowed the town and took many lives. Connectivity back then was not as advanced as it is today. There was no Internet connection and the Pamban bridge was the only way to reach Dhanushkodi other than waterways. As a result, the little town which was once a tourist spot with several pilgrims and fishermen, was reduced to ruins.

It all started when a super cyclone with a wind velocity of 270 km/hr hit Dhanushkodi on the night of 22nd December 1964. The tidal waves are said to have gone up to 20 feet. The Pamban Dhanushkodi Passenger train which left Pamban with 110 passengers and 5 members of the railway staff was hit by the high tidal waves and the whole train got submerged under water killing all 115 passengers. The Pamban bridge, which connected India to the Pamban island (Rameswaram island) also got destroyed leaving more than 3000 people stranded on the island. What remains one of the most memorable acts of bravery in India, four radio operators chose to remain in Dhanushkodi to broadcast updates during the storm. They survived by clinging on to the remains of the Pamban bridge for 12 hours for which they were admired and rewarded later. Over 800 people died in Dhanushkodi alone and the overall death toll was close to 1800.

Before the cyclone hit Dhanushkodi, it had a railway station and jetty service to transport travelers to Talaimannar in Sri Lanka. It was a busy port town with a working post office, a temple visited regularly by devotees and a church attended by locals and visitors alike. The cyclone devastated Dhanushkodi causing irreparable loss to life and property.

Still, Dhanushkodi has come quite a long way since the cyclone. Today, it is visited by travel enthusiasts who like offbeat destinations and are intrigued by its history. According to mythology, Dhanushkodi is the place where, on Lord Rama’s instructions, Hanuman and Lord Rama’s army built a bridge across the sea to reach Sri Lanka. It is located around 20 km from Rameswaram and around 31 km from Sri Lanka.