Dating back to around the 2nd century BC, Karla and Bhaja rock-cut caves in Maharashtra are among the better examples of Buddhist cave architecture in India. Since they pale in comparison to Ajanta or

Dating back to around the 2nd century BC, Karla and Bhaja rock-cut caves in Maharashtra are among the better examples of Buddhist cave architecture in India. Since they pale in comparison to Ajanta or Ellora, they are subsequently low on commercial tourism, making them ideal places for a quiet excursion. Whether you’re interested in history, philosophy, architecture or photography, these caves, about 9 – 11 kms from Lonavala, will not disappoint.

Karla Cave has the most impressive single cave and the largest early chaitya (a shrine, sanctuary, temple or prayer hall most common in Buddhism, where it includes a stupa at one end) in India. It can be reached after a 20-minute hike from the minibazaar at the base of a hill. The gorgeous chaitya is around 40m long and 15m high and sports a vaulted interior and intricate sculptures of Buddha, humans and animals.

These caves have some amazing features like: a semicircular ‘sun window’ filtering light in towards a dagoba or stupa protected by a carved wooden umbrella, the only remaining example of its kind; the ancient teak buttresses on the cave’s roof; around 37 pillars forming the aisles topped by kneeling elephants; and a Hindu temple in front of the cave, which is always thronged by pilgrims whose presence adds colour to the scene.

On the other side of the expressway from Karla Caves, 3 km off the main road, are these historic deep, dark, rock – cut Bhaja Caves that are the greener and quieter of the region’s caves. 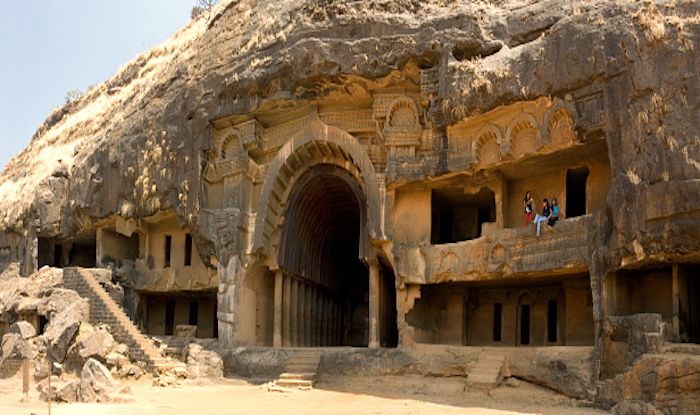 Thought to date from around 200 BC, 10 of the 18 caves here are viharas (sleeping area of monks), while Cave 12 is an open chaitya containing a simple dagoba. Beyond this is a strange huddle of 14 stupas, out of which five are located inside and nine are located outside the smaller cave.