The unbelievable story of a woman who walked from Mumbai to Goa!

Meet Aanchal Dhara Madan, the gutsy woman who set out from her home in Mumbai and walked 582 km over 26 days to reach Goa. This is her story. 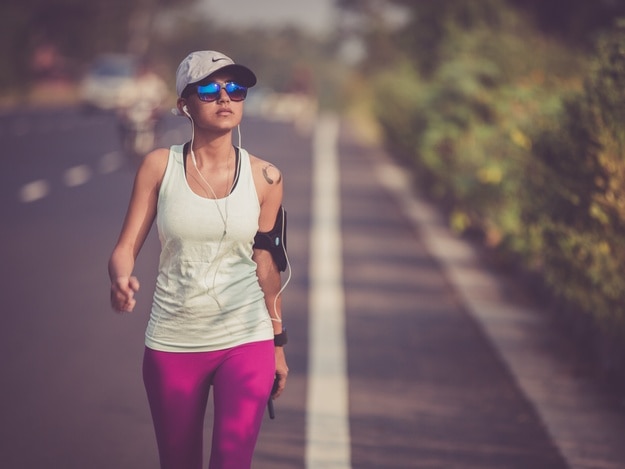 One evening, over dinner, Aanchal Dhara Madan brought up the idea of taking a really, really long walk — from her home in Mumbai to her favorite place in Goa, Morjim Beach, to be precise. Before long the two were drawing up possible routes and discussing logistics. Walking had always been part of Aanchal’s life. As children, her parents would encourage her to walk — while visiting family or playing antakshari or even while learning arithmetic tables. And then one rainy evening in Mumbai some years ago, she thought of undertaking long-distance walking simply to test her limits. “I did not know where (I was going). I didn’t even know that something like that is called an ultra-sport,” she says of her ‘discovering’ long-distance walking. It would be months before she discovered just what she was getting into and what she was setting out to achieve. It was then that Aanchal Dhara Madan and her husband Prashant set out planning on how they’d achieve it. Also Read - Indians Onboard Quarantined Cruise-liner Will be Back Soon: Envoy

Walking is perhaps the most primitive activity of the human race. It is also how our ancestors migrated from Africa and settled around the world. As you are reading this, in some corner of the world the Pulitzer Prize-winning journalist Paul Salopek is retracing human migration in a 21,000-mile, seven-year journey… on foot. The journey that began in Ethiopia and will end in Tierra del Fuego in Argentina is quite aptly called the Out of Eden Walk and one that chronicles the human life on earth. Aanchal Dhara Madan’s walk, though significantly small by comparison, attempted to answer one very significant question that has plagued our routine-ridden, busy, urban lifestyle: Just how far will you go for a life-changing experience? 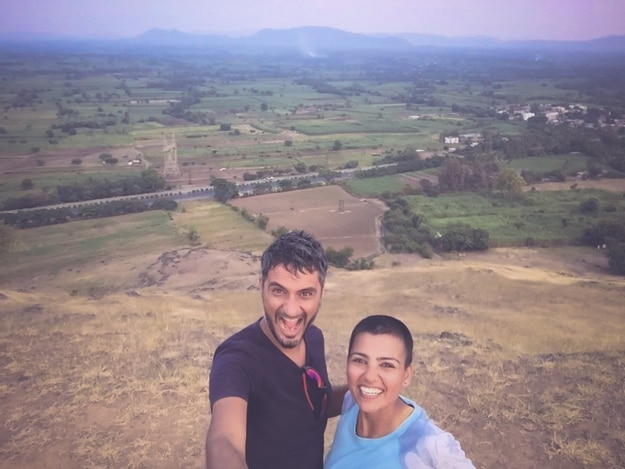 Aanchal and her husband Prashant founded The Audacious Project through which they hope to invite people to join them in audacious, life-changing experiences and experience what it feels to act on ones passions.

We hope it would inspire them to step out of their comfort zone and act on what they feel passionate about,” she writes. “Two Feet and A Dream, is the first project under our brand and is a journey on foot from Andheri (in Mumbai) to Morjim Beach (in Goa). We were looking to break away from our regular city lives, inspire and be inspired and above all to discover more about ourselves than we knew already.”

How to train for an ultra-walk 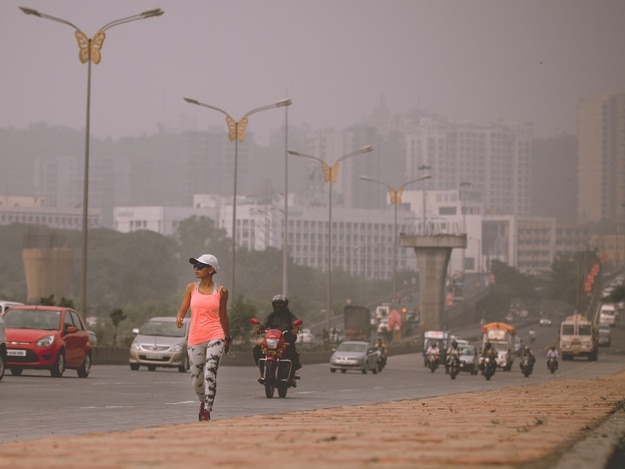 Despite its seemingly primitive and basic nature, ultra-walking is more difficult than one can imagine. Try hitting 10 k on the treadmill tonight and you’ll know what we mean. Training for a walk of this nature is just as important as training for a 42 km marathon. And so even though Aanchal has always been a regular walker in Mumbai, she had to train specifically for this project. “Six months before the walk, I began walking 10 km every day,” she says. Slightly closer to the date, she began to walk 30 km a day — the distance she was hoping to complete in a single day every day for the duration of the walk. This was supplemented by strength training in the gym twice a week. In late 2014, she walked from Mumbai to Pune, a distance of 170 km that she covered in seven days.

Simultaneously, she also did a recce of the route with her husband and identified possible places where they could stay or places where they could eat at along the way. “Nothing was pre-booked because we had no idea of knowing if we would stay on schedule or not. So every evening, after the walking was done we would typically check into a hotel or a lodge closest to us,” she says.

Why walk at all? 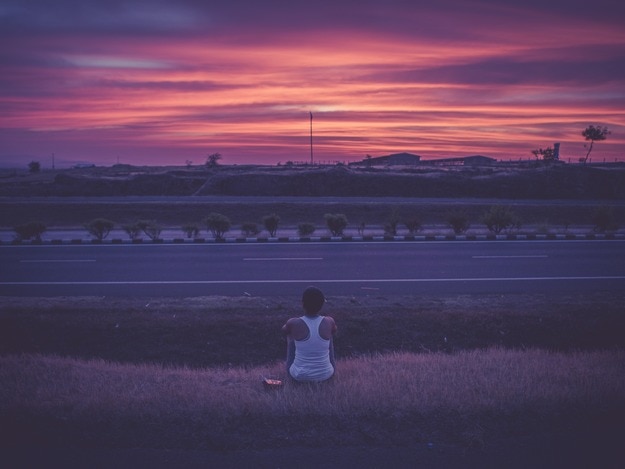 Aanchal says that one of the ideas behind undertaking a project of the nature was to discover her own potential ‘and hopefully send a strong message about acting on our dreams and passions, especially for women.’ She says: “I’d like women to step out of their comfort zones, leave behind what others consider their traditional roles in society and do something that makes them feel alive, something that ignites the fire of achievement inside them.” 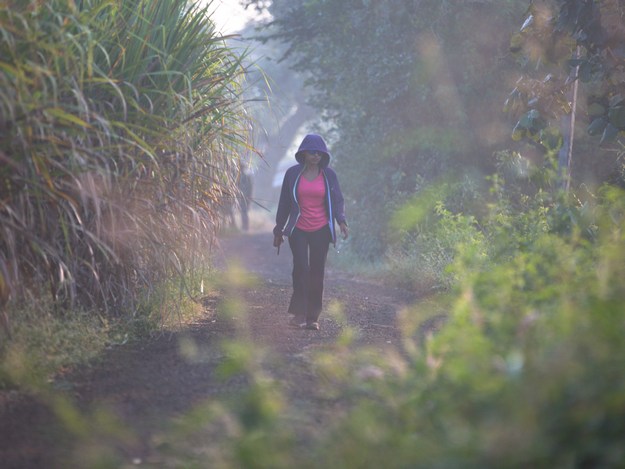 Goa was the obvious choice for the couple because ‘Goa is like second home’! The couple visits Goa thrice every year and Morjim is their favorite beach. It only seemed apt it served as the finish point of the walk. 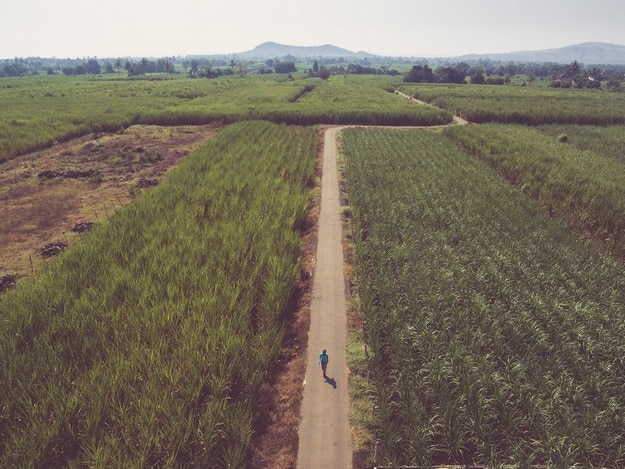 The walk was documented in great amount of detail by her husband, who, like her is a visual artist (she is a photographer and her husband is an ad filmmaker). “The art of capturing visuals is very important to us. The walk was our first priority but we did try and film as much as possible early in the mornings and in the pre-sunset evenings when the light is best to shoot outdoors,” she writes.

Being a wedding photographer also meant that Aanchal had to undertake the walk in October, one of the hottest months of the year in this part of the country — most of her work happens between November and March the most pleasant months of the year in the country. It also helped that Prashant’s work commitments permitted him to take almost a month off and shoot this project. 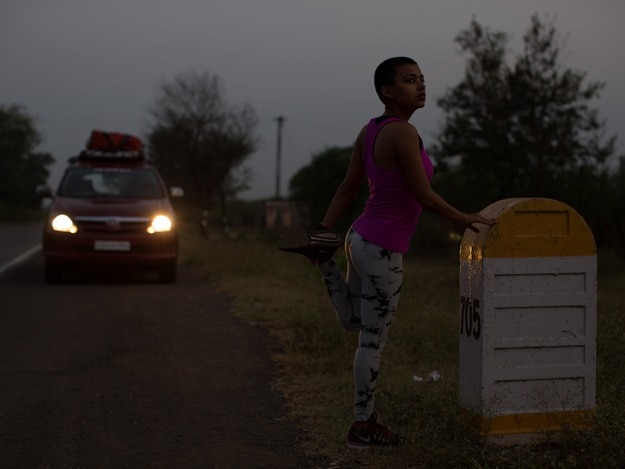 Aanchal walked primarily along NH4. She walked up to Pune along the old highway then onward to Satara and Kokhapur and finally she left the highway just after Nipani and made her way to Goa through Amboli Ghat via Sawantwadi via NH17. All the while, her support car that had her husband and his camera crew would be following her. At times it would drive up ahead to get a shot or two of the landscape or film her walking.

As planned, she would cover 30 km every day. She walked for eight hours a day. The breaks added up to about 90 minutes every day and shooting took some more time. “We would start every day at 6 am (and I would walk) till about 1 pm. From 1 to 3 pm we would then take a longish lunch break. This is so we could avoid walking when the sun is at its peak. Then we continued till 6.30 or 7 every evening,” she says. Overall, she would be on the road for about 12 hours every day.

DO READ 10 Indian women adventurers and travelers who inspire us every single day! 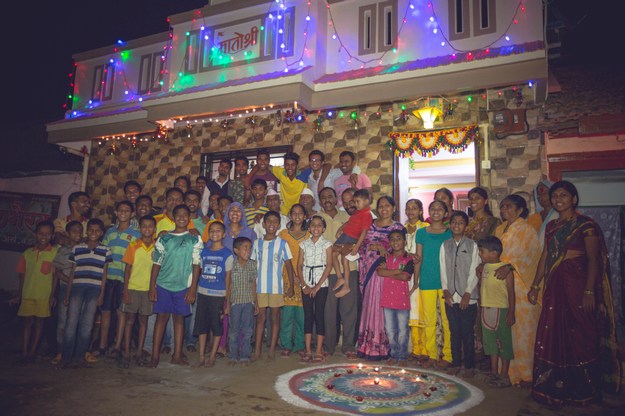 As with every journey, this one too brought with it, a unique set of experiences. Aanchal met a lot of interesting people along the way who offered her food, shelter and experiences that would last a lifetime.

Anandi Chavan the sarpanch at Vadarge village invited Aanchal and her crew over to her house on Diwali night. 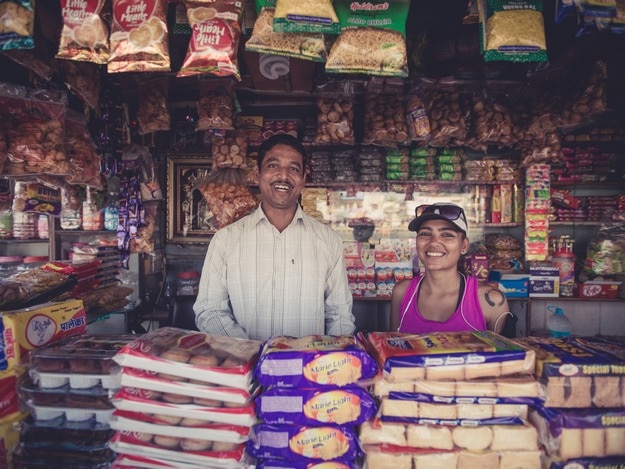 Then there was Ramakant, a farmer and sugarcane juice vendor who had been able to cultivate just a fourth of his land but did not hesitate even once before giving them an extra glass of sugarcane juice without charging them for it. In fact she came across several farmers who would offer her their produce without once asking for anything in return.

Aanchal also met Sachin, a shopkeeper who saved up to buy a bicycle that he hopes to ride to Delhi, a distance of 1500 km and a truck driver who was working through Diwali just to ensure that his children could continue their education — his daughter is a PhD and his son is studying for an MBA degree. 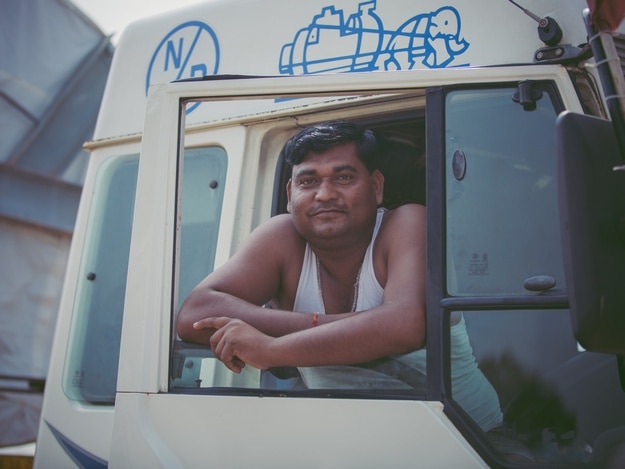 Finally there were these guys whose job it is to draw the striped lines along the road: 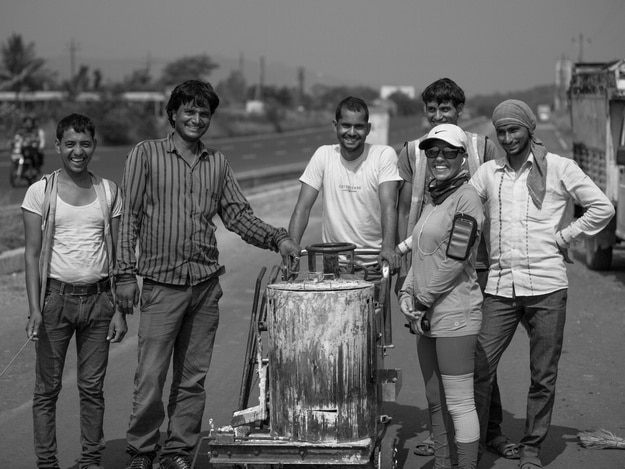 “There’s a rickety, heavy machine that is manually dragged by guys, aligned perfectly along a tape on the road. And then they release the paint for exactly the required time for one stripe to make an appearance. Now, the awesome part is that these guys paint 8-9 km every day! And they do it happily under the hot sun, so I asked them why they looked so happy? Their answer  they were really looking forward to spending Diwali with their families back in Rajasthan! To show my support, I painted one stripe. So there’s now a stripe somewhere between Pune and Satara with my name on it.”

Finally, after walking for 26 long days in the heat of the region’s second summer Aanchal, Prashant and the camera crew finally reached Morjorim. She recollects of the moment: “This might be obvious, but the finish line is really the best moment. It’s the point when it all comes together — all the effort, pain, planning and dreams just sort of melt away. It is a sweet feeling.” 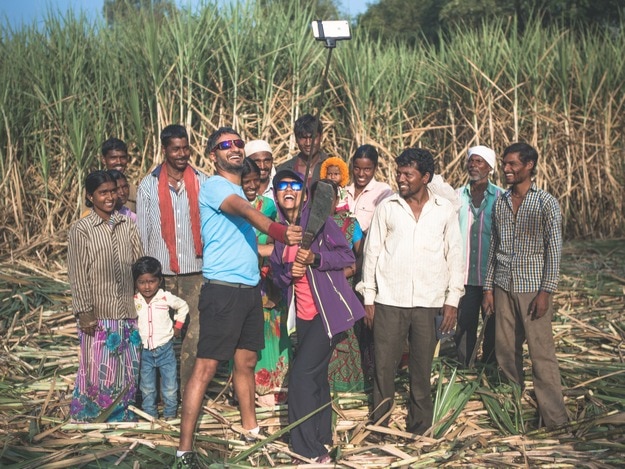 One of the things, Aanchal says, that will always stay with her is the hospitality of the country’s people. All the times that people welcomed her with open arms, offered her food and extended their hospitality to her crew will be things she says she’ll never forget. The walk also pushed her way out her comfort zone and while she doesn’t know what she hopes to do next, Aanchal Dhara Madan is pretty sure it’ll probably be something that I fear. 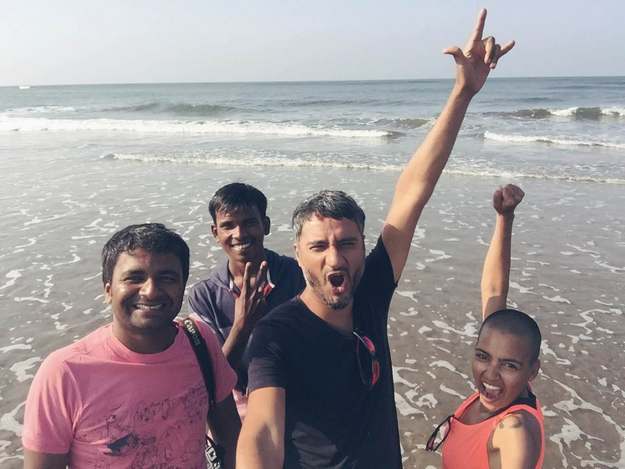 “There’s nothing like throwing caution to the wind once in a while,” she says. And we cannot help but agree with her!

Got something to add to the story? Post your comments in the discussion board below. We will be thrilled to hear from you!