There is a New Zip Line Across the Grand Canyon

There is now a new way to experience the incredible US Grand Canyon National Park. 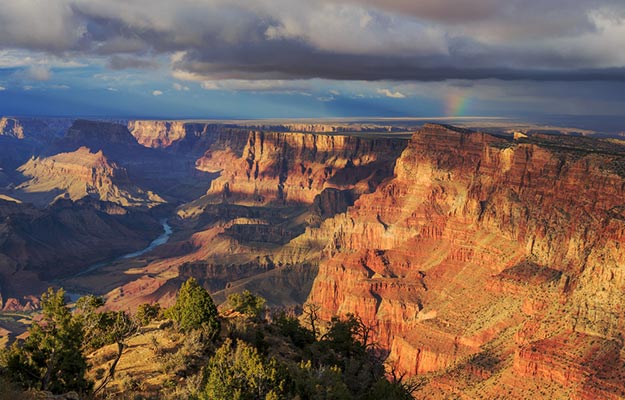 One of the seven natural wonders of the world and formed over two billion years, the Grand Canyon is something that cannot be put into words, no matter how hard you may try or photos you may click. It is immense and magnificent and so much more, and it has been there since half the lifetime of the earth. Carved by the Colorado River, the Canyon is home to some of the oldest rocks on the planet. But simply watching the Grand Canyon isn’t enough. To really understand the sheer scale of this canyon, you need to head to the West Rim, where a new zip line gives you a whole new perspective. ALSO READ: Makar Sankranti 2018: How Magh Bihu is Celebrated in Assam
Also Read - Indian Couple who fell to their deaths from cliff in US were intoxicated: Autopsy report

The zip line lies around 1,000 feet above the Grand Canyon, adding a new destination for adventure and thrill seekers. Located at the West Rim where you can also find the Skywalk, which lies thousands of feet above the billion-year-old chasm, clearly visible through the glass floor. The Grand Canyon West zip line opened on January 2, 2018, and has two quad zip lines supported by massive metal structures on either side of the canyon gorge. The zip line uses four parallel steel cables, allowing groups of four people to ride together at any given time. Also Read - Colossal erosion transformed ancient Earth's surface: Study

The Grand Canyon Resort Corporation’s chairwoman Candida Hunter said in a statement that the West Rim zip line will be one of the most exciting and longest zip lines in the world, and it certainly seems that way. The new zip line is fully active now and should be well worth the visit. It will be able to accommodate around 350,000 visitors every year, with ticket prices of USD 89 per person, which comes to around INR 5,600. The ticket lets you go on the zip line and explore the park as well, though the Skywalk will come at an extra cost. The zip line will be active Tuesday to Friday, from 9am to 4pm. NOW READ: Photos of Blyde River Canyon in South Africa, Worlds Third Largest Canyon
Also Read - Indian couple falls to death in California's Yosemite National Park while taking selfie: Report

The first two zip line is 1,100 feet long, while the second one is around 2,100 feet long and is sloped steeper. You can reach speeds of up to 50 miles per hour on both the lines. While you ride the zip line, you can catch incredible, unobstructed views of the Quartermaster Canyon that you won’t get anywhere else on the ground. Look down and you will also be able to see and experience the rocks and river below you like nowhere else in the entire Grand Canyon National Park.