Before dog owners were filling Instagram with photos of their puppers, our earliest ancestors were showing off their own pets on rock carvings. 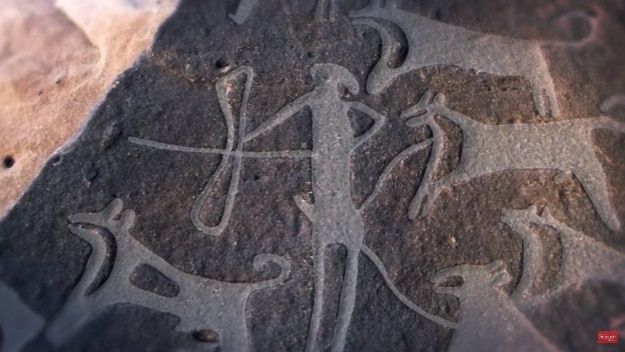 Archaeologist Maria Guagnin from Germany’s Max Planck Institute has spent three years so far on neolithic rock art panels in the rock heritage sites of Shuwaymis and Jubbah, Saudi Arabia. And these 1,400 panels of rock art, created by humans 8,000-9,000 years ago, show at least 349 dogs. At first sight, it seems like these dogs are shown living in harmony with us, hinting that they were well on their way to becoming man’s best friend. More work needs to be done to confirm the age of these paintings and their meaning, but they could be the earliest ever known depictions of domesticated dogs. ALSO READ: 11 things you probably didnt know about Wayanad but should! Also Read - Indian Businessman Donates Entire Building For Coronavirus Quarantine in Dubai

This is big news. Most people know that dogs are a smaller species of canines, likely branching out from wolves. Experts believe that they gradually evolved themselves to form a co-dependent relation with humans over the millennia. And our earliest ancestors seemed to have literally carved out a position for their four-legged pals, on the rock formations that now lie in Saudi Arabia. Here’s a quick video of the rock art. Also Read - Watch: Saudi Doctor Returns Home, Breaks Down in Tears After Stopping Son From Hugging Him

A report on the rock formations, written by David Grimm for the Science Magazine, say that the dogs are seen helping in hunts, biting gazelles and ibexes and circling and attacking animals like equids and even a lion. Some images seem to show the dogs leashed to the waists of humans, suggesting that humans figured out how to train dogs thousands of years earlier than what we previously thought. It’s still not clear when the rock art was made. CHECK OUT: Bangalores hidden gem: The Government Museum! Also Read - G-20 Countries to Inject $5 Trillion Into Global Economy to Combat COVID-19: Report

The earliest carvings of Shuwaymis and Jubbah date back to around 10,000 years ago. Domesticated sheep, goats and cattle start showing up in rock art dated to around 7,000-8,000 years, and the art showing dogs seem to show up just before this time. If the estimations of the researchers are right, they could be older than the artwork of dogs seen in pottery in Iran. Right now, this 8,000-year-old pottery is considered the oldest depiction of dogs as our companions.

Our friendship with dogs seems to stretch back even further back than the oldest rock art. A recent study of dog DNA suggests that the split from wolves happened some 40,000 years ago, and a recently-discovered 14,700-year-old human grave seems to have the remains of a dog buried alongside.

Jubbah and Shuwaymis are said to have the oldest and best-preserved examples of Neolithic rock art. Shuwaymis lies southwest and Jubbah northwest of the city of Ha’il, and the latter is more well-known and published. Shuwaymis covers around 370 km of land and was well-known among the Bedouins for centuries. However, it was only in 2001 when a local school headmaster brought it up to the authorities. It is surrounded by lava flows that create a striking landscape, unlike Jubbah. NOW READ: Bhimbetka rock shelters  A must visit destination for history lovers!

Jubbah is an oasis and a growing town, located on the remnants of an ancient lake and surrounded by the Nafud sand sea. To its west is Jebel um Sanman, the two camel-hump mountain, a magnificent sandstone rise that houses much of the rock art. Together with Shuwaymis, Jubbah has some of the greatest rock art in the Arabian peninsula.