These divers met the second-largest shark in the world, what happened next will leave you speechless!

What do you do when you go diving in Ireland, only to see the second-largest shark in the world underwater? This divers stuck around to shoot a video of a couple of basking sharks in Ireland that swam towards them! 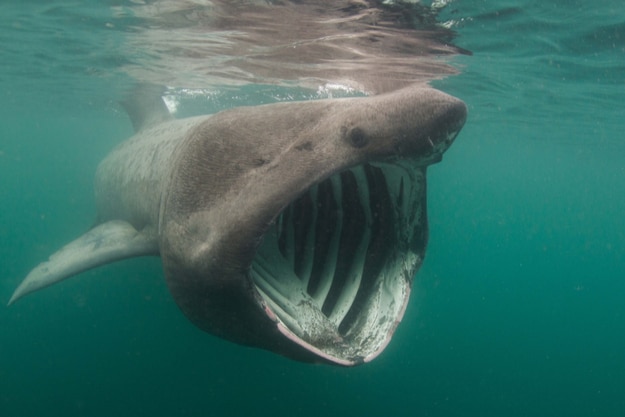 Basking shark off the coast of Scotland, UK

The greyish-brown basking shark is intimidating to say the least. It’s no Great White when scoring on scare value, but any diver who sees it would first think that they’ve just got premium one-way tickets to meet their maker. But that was not the case for UCD Sub-aqua divers Davy Lynn and Gavin Ó Brian. When they went diving in the waters off the coast of County Mayo in Ireland, the duo saw the silhouette of two sharks approaching them, they just kept the video rolling. ALSO READ: 5 best places to go scuba diving in India
Also Read - Dream11 Prediction and Tips West Indies vs Ireland 1st T20I, Ireland tour of West Indies: Captain, Vice-Captain, Fantasy Cricket Tips For Today’s Match WI vs IRE at National Cricket Stadium, St George’s, Grenada 10:30 PM January 15

So why didn’t these guys flee the scene on seeing the sharks? Well, the divers quickly realized that the sharks approaching them were, in fact, the second-largest of the species in the world right now. Basking sharks are pretty much as harmless as their names suggest. Despite their size, they prefer to limit their diet to teeny tiny plankton and keep us humans away from the dinner table. Also Read - New Year 2020: From Throwing Furniture to Celebrating in Graveyard, 12 Weird New Year Traditions Around the World

Not that sharks are maneaters; instances of shark attacks on live humans are a rarity. Just four species have been known to taste a little man meat every now and then: the Great White and Oceanic White-tip and the Bull and Tiger sharks. As for the Basking sharks up in the video; they don’t even have teeth. Also Read - Pakistan Cricket Board Invites South Africa, Ireland For Limited- Overs Series

So the two divers were experienced and aware enough to know that they were not in trouble. They continued to film the sharks, excited that they were filming something really rare. Why rare? Well, two reasons. For one, basking sharks are migratory, swimming across the oceans from season to season. The second reason is that they are a vulnerable species. They often get accidentally caught in trawl nets and are also purposely hunted for commercial purposes. Thankfully, bans by several governments have helped protect the species to a huge extent.

The two sharks seen in the video above swam over to the divers around 20 meters below the surface, in the waters off the Stags of Broadhaven, a series of rocky islands that are part of the Broadhaven Bay. Incidentally, basking sharks are often seen in bays and waters close to land and are visible at the water surface. These two basking sharks stayed with the divers for around two minutes before moving on. Basking sharks can be seen off the coast of Ireland from April to August as they chase plankton. NOW READ: Jacqueline Fernandez swims with a whale shark in Maldives!