According to NASA images, Diwali firecrackers is not be the actual cause behind Delhi's raised air pollution 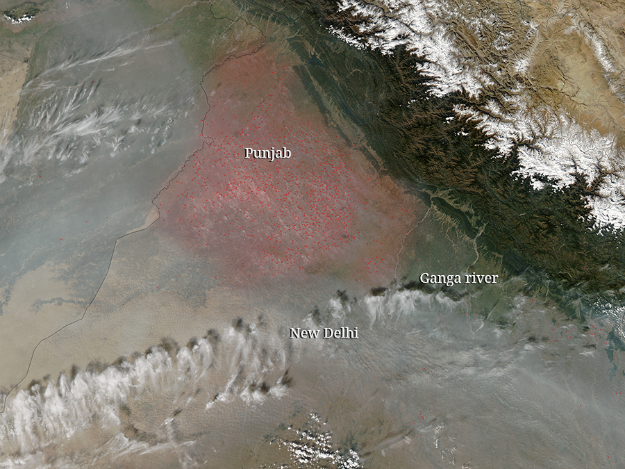 Over the past couple of days, Delhi residents have been complaining about heavy smog causing respiratory problems as well as an itchy sensation. This has raised an alarm about the rising levels of pollution in India’s capital city. WHile people are expressing their rage on print as well as social media about how the DIwali firecrackers have led to this disaster, some images released by NASA suggest that the cause behind this smog and the raised level of pollution is actually something else. (ALSO SEE Guess which is the most polluted city in India and no, its not Delhi!) Also Read - CREDAI Seeks Urgent Support For Realty Sector in Letter to PM Modi

Recent NASA images suggest that it’s not Diwali but the smoke released from burning of crop stubble by the farmers in Punjab and Haryana that could have caused this dangerous situation. The burning of paddy stubble goes on in several parts of India despite it being illegal in most states. For instance, in Punjab, violators are supposed to be booked under section 188 (disobedience to order duly promulgated by public servant) of the Indian Penal Code and the Air (Prevention and Control of Pollution) Act. However, since the farmers can’t afford to buy machines to do away with loads of paddy stubble, they are left with no option but to burn it. As per reports, Punjab burns between seven and eight million tons of plant debris from its rice farms every year. The fumes have a significant effect on the nearby NCR and even NASA noticed this resulting into the release of annual photos of the fires over Punjab’s fields. Also Read - Karan Johar Birthday Celebrations: Little Munchkins Yash And Roohi Cut The Cake as Mom Hirroo Johar Sings 'Happy Birthday'

Delhi is bearing the brunt of this act right now but it is not new to air pollution issues. NASAs Moderate Resolution Imaging Spectro-radiometers aqua-satellite was passing over Punjab when it captured the thick blanket of fog in Delhi. The red dots you can see in this image taken on October 31 is the area where the burning was taking place. It’s not just the fire that is the concern here. You can also see a layer of aerosols including smoke, haze, dust and particulate air pollutants. In fact, Delhi’s poor air quality is quite infamous with the government being forced to incorporate remedial remedial measures like the Odd-Even rule which banned private car plying on city roads for two weeks for a certain period. These measures have not succeeded and the recent NASA images have given cause for further concern. (CHECK OUT 5 best places to escape Delhi pollution right now)