These photos of Prince William and Kate getting a royal welcome in Bhutan are simply amazing!

Here's how Bhutan greeted the royal couple in style. 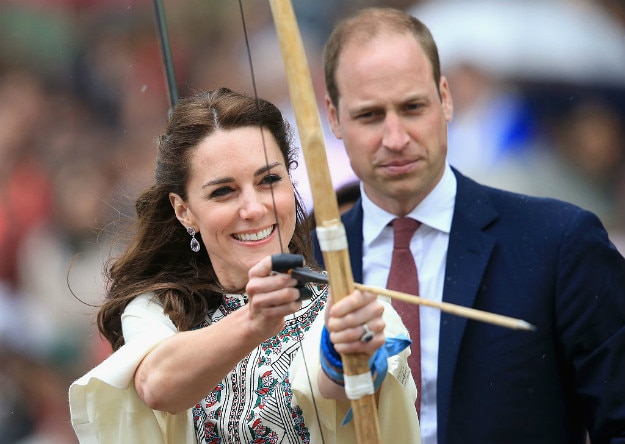 After spending four days in India visiting Mumbai, Delhi and Assam, Prince William and Kate left for Bhutan this morning. In India the royal couple laid wreaths at many places of historical importance, played cricket at Oval Maidan and met Bollywood celebrities in Mumbai. They also met the PM in Delhi and headed to Assam where they got a warm welcome and later explored the Kaziranga National Park. After seeing these parts of the country, the royal couple took off for Bhutan but will be back in India to finish the last leg of their trip in Agra.Also Read - IPL 2021 Points Table After MI vs KKR: Kolkata Knight Riders Jump to Fourth Spot After Win Over Mumbai Indians; Shikhar Dhawan Leads Orange Cap Race

Bhutan too welcomed them in the most royal way possible with their folk songs and dance and the King and Queen of Bhutan extending them a warm welcome. The Duchess of Cambridge even wore a traditional Bhutanese dress and the couple tried also their hand at archery, the nation’s national sport. The royal couple has a packed itinerary in Bhutan with a six-hour trek squeezed in too. Looks like the two have many things to see and explore before that. Here’s how Bhutan welcomed them in their country. Also Read - Aadhaar Card Update: Now You Can Update Name, Address, Phone Number In Local Languages Too. Here’s How to do it

The Duke and Duchess have touched down in Paro #RoyalVisitBhutan has begun! pic.twitter.com/W4GGcUN6dc

Such a lovely welcome! The Duke and Duchess stop to say hello to children who lined the road to Thimpu. pic.twitter.com/GOqQY6FXtq — Kensington Palace (@KensingtonRoyal) April 14, 2016

The Duke and Duchess arrive at the Dzong in Thimphu to meet The King and Queen of Bhutan #RoyalVisitBhutan pic.twitter.com/h3i88rmFRv

The Duke and Duchess with The King and Queen of Bhutan #RoyalVisitBhutan pic.twitter.com/7diwsZ4yzC — Kensington Palace (@KensingtonRoyal) April 14, 2016

Whilst they were there The Duke & Duchess met local children from NGOs Draktsho and Ability Bhutan #RoyalVisitBhutan pic.twitter.com/cDm9SQ1OtF

We can’t wait to see what else Bhutan has in store for the royal couple. We also can’t wait for Will and Kate to return to India and see the Taj Mahal in all its glory.