This Couple Got Married on a Fight Over Chile, By the Pope!

What was your most memorable experience on a flight? 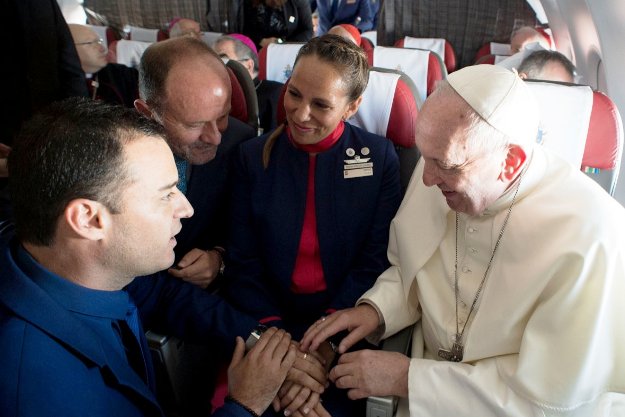 Compared to the flashy early days of air travel, today’s flight travel is a relative drab affair. Sure, the takeoff and landing parts are exciting, but the rest of the time you’re probably left twiddling thumbs and whiling away time. But the LATAM flight number 1250 on Thursday from Chile’s capital Santiago to the northenr coastal city of Iquique was the exciting exception to the rule. The flight was already special, thanks to the presence of a very special guest: Pope Francis himself. And what made it exceptional was the marriage that took place on board. ALSO READ: Visit These Ancient Wonders of Peru to Get a Glimpse of Earliest Human Civilizations
Also Read - 'No Massive Forest Fires in Uttarakhand': Forest Department Clarifies Fake News, Cautions Against 'Wrong' Pictures Shared Despite Rain

The pope was on a flight as part of his ongoing South America tour. On board the special chartered flight were a flight attendant couple, Paula Podest Ruiz and Carlos Ciuffardi Elorriaga. During the flight, the two approached the pope for a photograph, but they got a lot more in return. The pope asked if they were married, but the couple told him that they did plan to marry in 2010, but the massive earthquake in Chile that year destroyed the church where the ceremony was to be held. In the end, the two conducted a simple civil ceremony. Also Read - Chile Air Force Aircraft to Antarctica Goes Missing With 38 on Board, Feared Crashed

On hearing their story, the pope offered to get the couple married in the eyes of the Catholic Church right there, on the flight, thousands of feet up in the air. When they said yes, the pope blessed their wedding rings and got them married. The rest of the passengers, which included journalists, applauded the ceremony and the ‘newly-weds’, who held a quick press conference upon completing the rituals. According to the groom, the pope said that the marriage was historic, and we kind of believe him. It isn’t everyday that the head of the Catholic Church officiates your wedding on board a flight. NOW READ: Peru Adventure Activities for an Adrenaline Rush like No Other

In Iquique, Pope Francis held an open mass on a beautiful beach at the city and proceeded to the next stop on the final leg of his South America tour: Peru. As for the marriage itself, it is as legal as any Vatican document. LATAM Chairman Ignacio Cueto Plaza was the official witness to the ceremony, as was the pope’s assistant, Monsignor Mauricio Rueda. A hand-written marriage certificate signed by the pope was presented by Rueda to the couple as proof of the marriage.