This Video Documents Efforts to Save the Sumatran Tiger

The tigers of the island of Sumatra are a Critically Endangered species, with just over 400 left in the wild today. 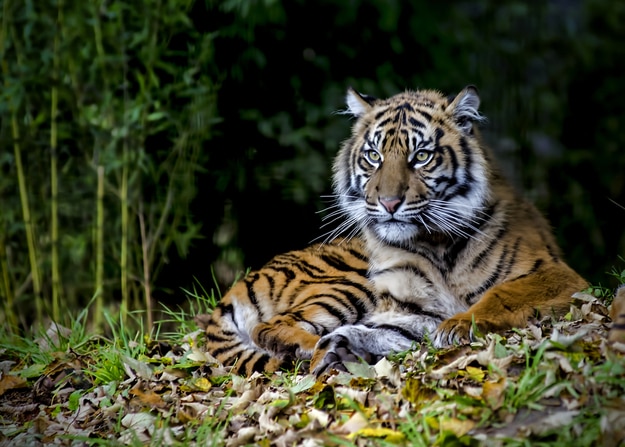 The jungles of the Indonesian island of Sumatra were once home to a thriving population of Sumatran tigers, a subspecies very different from the Javan and our own Bengal tigers. They are smaller and darker, with more frequent stripes than either species, and they are usually found in altitudes as high as 2,600-3,200 meters above sea level, in the dense mountain forests of the island. But deforestation and poaching have brought these rare tigers to the brink of extinction. They are Critically Endangered, with a little over 400 left in the wild. A newly released documentary by GoPro on YouTube describes the struggle to save these tigers. ALSO READ: How many tigers are left in India? Also Read - Indonesian Man Dresses Up as Spider-Man To Clean Up Plastic Waste, Urges Others to Do the Same

The video comes at a time when a new study in Nature Communications found an annual increase of 5 percent in tiger density in the three largest protected forests of Sumatra from 1996 to 2014. It seems like good news and an indication that preservation efforts are effective, but the study comes with a disclaimer that this may not be the case. The researchers said this increase could have come from more tigers escaping the unprotected forests, due to the continuing threat of deforestation and poachers after their skin and bones, which are still in high demand in the black market. Also Read - Malaysia PM Defends Criticism Over CAA, Says 'Need to be Frank' Despite India's Palm Oil Curbs

The documentary follows a team working on keeping these majestic big cats from vanishing, particularly one tiger that they are constantly protected from coldblooded hunters on the prowl in the jungles. Speaking to the New Scientist, Matthew Luskin from Singapore’s Nanyang Technological University said that we are at a tipping point in how much habitat is left for the long-term survival of tigers. Luskin, a Smithsonian Institute research fellow, authored the study on the tigers. Describing the results, he said that more tigers are basically settling into smaller areas. NOW READ: 10 best places to spot tigers in India Also Read - World's Largest Flower Which is 4ft Wide & Smells Like Rotten Meat, Spotted in Indonesian Jungle

The population of Sumatran tigers, already a small species found only in the western Indonesian island, has dropped from 1,000 recorded in 1978 to around 400-500. Sumatra’s rainforests are quickly turning into palm oil and rubber plantations, and in the increasingly smaller pockets of wild jungles, poachers are on the prowl to hunt the big cat and make a quick buck, even if it means rendering the entire species extinct. The documentary here captures one threat to the tigers. As for the other threat, palm oil remains a highly profitable item to produce. It is used widely in a number of products, from ice cream to soap. Encouraging people to stop growing their plantations, then, remains a challenge.