This Video of BASE Jumpers Flying into an Airborne Plane Is Insane!

A couple of Soul Flyers pulled off this insane maneuver from the top of a 4,000-meter Swiss mountain, flying their way into an airborne plane. 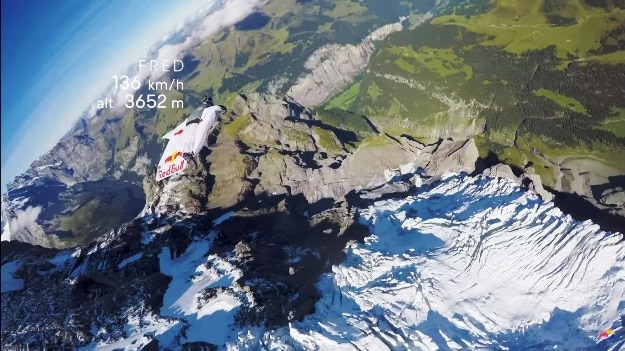 If skydiving, bungee jumping or other such extreme sports seem ‘traditional’ or blasé to you, there is wingsuit BASE jumping. BASE stands for Buildings, Antennas, Spans (which means bridges) and Earth: all the things that you can leap from with a wingsuit to glide. It is one of the newest extreme sports to capture the attention of adventure seekers, and it is also prone to danger. 2016 was considered the deadliest year on record in the world of BASE jumping. ALSO READ: Places in India for Extreme Sports: Best Places for Bungee Jumping, Skydiving and Paragliding Also Read - Ranveer Singh, Allu Arjun And Other Celebs Feel Proud After Switzerland's Matterhorn Mountain Light up in Tricolour

But that didn’t stop a couple of BASE jumpers from the Soul Flyers team from attempting a crazy maneuver: jumping from the top of a Swiss mountain and gliding their way into the open cargo hold of an airplane at nearly 130 kilometers per hour. Take a look at this video of the incredible stunt, performed with support from Red Bull and aptly titled, A Door In The Sky. Also Read - Netizens Trend #Switzerland After Matterhorn Mountain Illuminated in Tricolour to Show Solidarity to India, Say 'Proud Moment'

The BASE jumpers here were Fred Fugen and Vince Reffet, based in France and part of the Soul Flyers, a team that began in 2003 as a group of skydivers, BASE jumpers, and paragliders. Fred and Vince eventually restarted the team in 2010 after it went into standby and now act as the main athletes of the group, working together with the cameraman and photographer Jean-Philippe. Two of the original members of the group, Loïc Jean-Albert and Stéphane Zunino, still serve as mentor and designer of BASE jumping gear, respectively. Also Read - Viral Photos: Switzerland's Matterhorn Mountain Illuminated in Tricolour to Show Solidarity to India Amid Cronavirus Outbreak

The jump was a homage to a similar stunt performed by pioneering French skydiver and BASE jumper Patrick de Gayardon in 1997. In the original stunt, de Gayardon made his jump from an airplane, gliding and guiding his wingsuit before landing back into the plane while it was still up in the air. To mark the 20th anniversary of this insane stunt, Fred and Vince took it a step further and jumped from the top of a mountain in the Swiss Alps and flew back into a small cargo hold of a flying aircraft.

The two first climbed to the top of Jungfrau, a mountain that rises up to 4,158 meters and is a major summit in the Bernese Alps of western Switzerland. Its name roughly translates to ‘virgin maiden’, and its distinctive wall-like structure overlooks the Swiss Plateau and the Bernese Oberland. Even from the base, this mountain looks like nothing else in the Swiss Alps. NOW READ: 21 stunningly beautiful pictures of Switzerland that will leave you enchanted

Connecting this mountain to the nearby Mönch mountain is the Jungfraujoch saddle, which you can visit even if you aren’t looking to do some daredevil BASE jumping. From the saddle, you can see the Aletsch glacier on one side and the Mittelland on the other. You can reach this famed Alpine saddle by train, catching the Bernese Oberland train from Interlaken Ost station to Grindelwald or Lauterbrunnen station. From there, you can catch a Wengernalp cable car and head up to Kleine Scheidegg. Then take a train to Jungfraujoch; the whole journey from Interlaken takes around 2 hours.