The Tianjin Binhai Library opened earlier this November, and everyone has gone crazy for it. Here's what you need to know about the 'Eye of the Binhai'. Earlier in November 2017, the Chinese port city of Tianjin welcomed its newest attraction, the Tianjin Binhai Library. It has been built by the Dutch company MVRDV in coordination with the Tianjin Urban Planning and Design Institute and designed by Starchitect. And it is grabbing eyeballs and headlines right now for its out-of-the-world design, among other things. Here is a look at five things you should know about the Tianjin Binhai Library, also known as the Eye of the Binhai. ALSO READ: 15 stunning photos of Shanghai that will take your breath away! Also Read - Ben Stokes is a Bit Like Virat Kohli, he Will Turn Out to be an Excellent Captain: Nasser Hussain

It took just three years to build the library

Spread across 36,000 square feet, the Tianjin Binhai Library took just three years to complete. That’s pretty fast, considering that most mega-projects take a decade or more to build. The Burj Khalifa took around six years to build, while the tallest building in the Western Hemisphere, the One World Trade Center in New York, took seven years. Also Read - Vikas Dubey, UP's Most Wanted Didn't Figure in List of Criminals 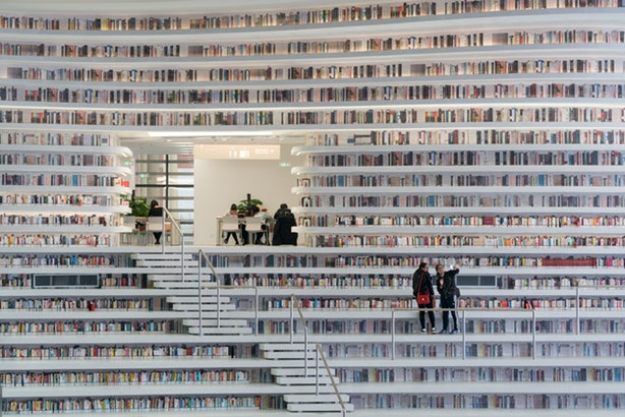 It has a mind-bending spherical atrium

The big draw of the Tianjin Binhai Library is its atrium. With a giant white sphere at the center of the atrium and the immaculate white interiors, visitors here feel like they’re walking inside a giant eye. That’s why the library has also earned the nickname Eye of the Binhai. The spherical atrium, designed to be an auditorium and discussion space, is five stories tall. CHECK OUT: The saddest zoo in the world is in China and it is called so for a reason
Also Read - Elon Musk Refutes Links With Child Trafficker Jeffrey Epstein After SpaceX CEO's Picture With Paedophile's Ex-Girlfriend Goes Viral

The Tianjin Binhai Library can hold up to 1.2 million books, which is a figure that should make any bookworm’s eyes pop. But hold onto those orbs, because the library has ‘just’ 200,000 books at the moment. And they are all located in rooms away from the atrium, where you can browse them and read them at your leisure. These reading rooms are at the bottom two floors, hidden behind the shelves curving around the eyeball at the center. Which makes you wonder, what are all those books that you see in the mind-bending atrium of the library? 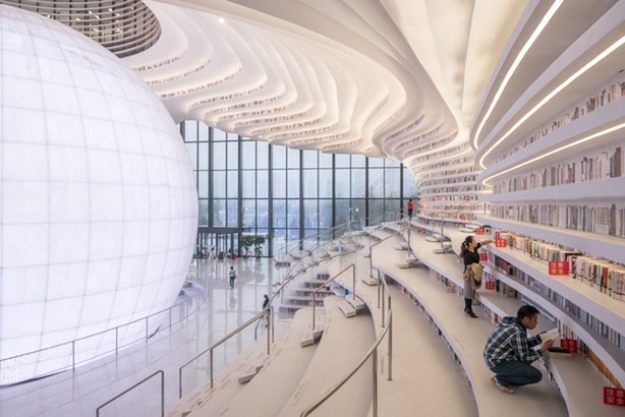 All the books in the atrium are fake

Well, as it turns out, the ‘books’ that you see placed in the curving shelves of the atrium are all actually fake. They are just silk-screened aluminum sheets printed with the photos of various book spines, making it seem like there are books stocked all the way up to the roof. Liu Xiufeng, the deputy director of the library, says that the atrium isn’t actually meant for storing books: the swirling shelves are basically just decoration.

The staircase in the atrium is a tripping hazard

The irregular white stairs that you see in the atrium, reaching from floor to ceiling, are actually a tripping hazards. The lack of contrast with the white color of the shelves and flooring and the irregular risers make it more likely for visitors to trip while climbing and descending. In fact, one guard is present to caution visitors on the stairs. The risk of tripping and falling is even greater considering how many people would want to click pictures of the otherworldly architecture. NOW READ: Photos of Gunkanjima Island in Japan That Showcase Its Desolate Beauty

But stairs shouldn’t stop you from considering a visit to this modern marvel of design. You can spend quite a bit of time Instagramming away in the atrium itself, before heading down to grab a book. Once you do, you can sit in a corner of the reading rooms or the atrium, or head to the two rooftop patios to read in the fresh air.