Travel Advisory: 13 Indian States are on Storm Alert for 2 Days

Be careful if you are traveling in one of these 13 states for the next two days. 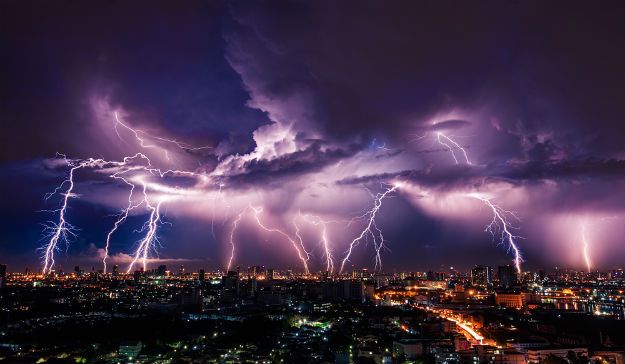 According to reports from the Indian Meteorological Department, several Indian states could face heavy rain and thunderstorms over the next two days. This has resulted into an alert situation in 13 states of India. Schools in Haryana have been shut for Monday and Tuesday. ALSO SEE 5 safest places for women travelers in India

Heavy rains are expected to hit the northeastern states of Assam, Meghalaya, Nagaland, Manipur, Mizoram and Tripura today. In addition these states are likely to see thunderstorms and gusty winds along with parts of western Uttar Pradesh, Bihar, West Bengal, Sikkim, Odisha, Karnataka and Kerala. The north Indian states of Jammu & Kashmir, Himachal Pradesh, Uttarakhand and Punjab are also likely to see thunderstorm accompanied by squall and hail today. The same can also be expected at isolated places in Haryana, Chandigarh and Delhi today. Parts of Rajasthan on the other hand are likely to face the brunt of dust storms.

For Tuesday, Thunderstorm, squall and hail have been forecast for parts of Jammu & Kashmir, Himachal Pradesh, Uttarakhand, Haryana, Chandigarh and Delhi. In south India, southern Karnataka, Tamil Nadu and Kerala could face thunderstorm and gusty winds on Tuesday. This is also likely to happen in parts of other regions like Punjab, eastern Uttar Pradesh, Bihar, West Bengal, Assam, Meghalaya, Nagaland, Manipur, Mizoram, and Tripura. CHECK OUT 5 simple tips you should follow when trekking in the monsoon!

Most of these states are tourist attractions that see a lot of visitors on a daily basis all year round. Just last week, a number of deaths were reported in Uttar Pradesh and Rajasthan on account of thunderstorm and dust storm. Travelers are therefore advised to stay indoors as much as possible and use their discretion before taking adventurous trips in the above mentioned regions.