Varalakshmi Vratam 2017 Celebration: How and When The Auspicious Lakshmi Puja of Shravan Month Is Held

Shravan 2017 has a bunch of auspicious Hindu days celebrated by devotees all over the country. One such auspicious day in the Hindu calendar is Varalakshmi Vratam 2017 which falls on August 4. Celebrated mainly in south India, this day calls for a Lakshmi puja which holds great significance for married Hindu women. Here's everything you should know about Varalaskhmi Vratam celebration in India. 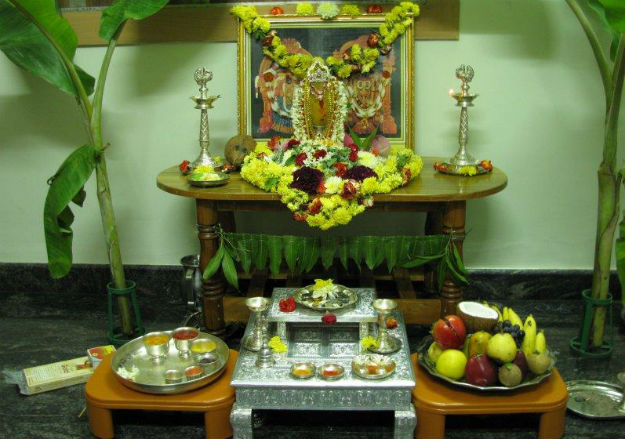 India is a land of many religions and each religion has a host of festivals scattered across the annual calendar. The monsoon season comes with its share of auspicious days in the Hindu calendar that call for convivial celebrations. One such auspicious day is Varalakshmi Vratam or Varalakhsmi Puja celebrated by Hindus in July-August. Prominent mainly in the south Indian states of Andhra Pradesh, Telangana, Karnataka and Tamil Nadu, Varalakshmi Vratam is an auspicious day when women perform prayers (pujas) and observe fasts. The festival is dedicated to goddess Lakshmi, a consort of revered Hindu deity Vishnu. Varalakshmi is believed to be the granter of boons or “varas” as they are referred to in Hindu culture. Therefore, married women observe fasts and offer prayers in the form of rigorous rituals on this day to ask for Varalaskhmiss blessings for their husbands health and wealth, and for progeny too. The festival is also called Vara Maha Lakshmi Vrata’ and falls on the second Friday of the auspicious month of Shravan in the Hindu calendar. Varalakshmi Vratam 2017 falls on August 4, one day before full moon day or purnima. Also Read - Despite Coronavirus Threat, UP to Hold Ram Navami Mela in Ayodhya; 10 Lakhs Pilgrims Expected

There is an interesting legend behind how the Varalakshmi Vratam came into being. It is believed that Lord Parameswara, the supreme ruler, himself demanded for this puja to be performed by his consort Parvati for the well-being of their family. As a result, all married women who wanted varas or blessings of health, wealth and knowledge for their families started emulating the rituals. This vrat is an addition to the Shravan Somwar vrats observed by Hindu devotees this month. Also Read - 'Not Right to Say All Are Hindus,' Athawale Slams Mohan Bhagwat Over '130 Crore People Are Hindu’ Remark

As part of Varalakshmi Vratam celebrations and prayer rituals, women clean their houses, and decorate photos or statues of Varalakshmi with flowers. Like most Hindu prayer sessions, the rituals are marked by usage of incense and breaking of coconuts. You will see a kalash full of water and a thali full of auspicious items like turmeric, vermilion Offerings of sweets and fruits are made to the goddess. In Hindu mythology, the Ashtalakshmi which stands for the eight goddesses of wealth, earth, learning, love, fame, peace, pleasure and strength, is considered to be extremely significant. Pleasing Ashtalakshmi is one of the auspicious tasks to be undertaken by devotees. It is believed that worshiping Varalakshmi is equivalent to worshiping the Ashtalakshmi. Vishnu is called Ashtalakhsmi Pathi which means that he is the asylum of the eight forces. Varalakshmi Vratam therefore assumes great importance for Hindu devotees. Also Read - Urmila Matondkar Issues Clarification After Facing Flak Over 'Anti-Hindu' Remark, Says 'I Respect Hinduism But Not What BJP Promotes'