Vijay Mallya’s Holi effigy in Mumbai is the most unreal thing you will see today!

The former Kingfisher boss has been at the receiving end of a lot of ill wishes. But some folks decided to give him the Holika treatment. 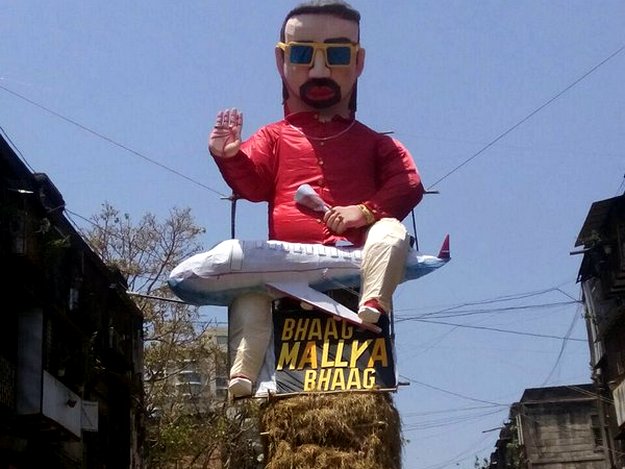 You probably know about the story behind the Holi bonfire. Burnt to commemorate the victory of good over evil, the bonfire harks back to the mythological tale of Prahlad, the young son of king Hiranyakashipu. The powerful king, who had earned a unique boon that would prevent him from dying inside any house or outside it, during daytime or night, in the ground or sky. The boon also made him impervious to any weapon and any human being and animal. Assuming that the boon granted him immortality, Hiranyakashipu demanded that he be worshipped by everyone in his kingdom. Which was all very fine, except that his own son, Prahlad refused to follow the orders. Prahlad, you see, was a devotee of Vishnu. Infuriated, Hiranyakashipu ordered Holika to kill Prahlad. And this is where the story gets interesting. Also Read - JNU Violence Highlights: Student Protests Emerge Across Delhi, Mumbai, Kolkata; Film Fraternity Joins in

Holi celebration in Jaipur: How Holi 2016 will be celebrated in Jaipur

Rang Panchami 2016: Why do we celebrate Holi with colors

Holika’s superpower was that fire could do her no harm and so she stepped into a pyre with Prahlad who kept praying to Vishnu for help in the assumption that she would be safe and he would burn to death. What happened though was just the opposite. In an attempt to kill her own nephew, Holika forgot that her boon was applicable only if she was alone. So before long, she was burnt to cinders and Prahlad emerged unharmed. The tradition of lighting a bonfire has its origins in this legend and celebrates the victory of good over evil. And this Holi, the folks at BDD Chawl thought it a good idea to express their anger towards a certain Vijay Mallya.

How a billionaire turned himself into a caricature! Unrestrained flaunting of wealth #VijayMallya Holi at BDD chawl pic.twitter.com/PeqaiJOoqg

The former Kingfisher boss has been in the news for several years now but never has the anger reached the kind of proportions it has over the last few months. News stories of Mallya’s mansion in England and a retirement kitty that will help him maintain the kind of luxurious lifestyle he has been used to have only added fuel to the fire. The result is this huge 40-feet effigy of Vijay Mallya that will be burnt as part of the Holi celebrations.

CHECK OUT Holi 2016 holiday: 8 great trips to take on the long Holi weekend

Holi 2016: How Holi is celebrated in Maharashtra

Mallya’s effigy sits atop a large stack of hay and a board that (somewhat ironically) reads Bhaag Mallya Bhaag (or Run Mallya, Run). Burning of effigies isn’t an unusual way of protesting but burning one as a Holi bonfire sure as hell is innovative!

What do you think of this? Post your comments in the discussion board below and tell us!