Visit the Sassoon Dock Art Project in Mumbai, Dedicated to the Fishermen

The St+art Mumbai Festival's Sassoon Dock Art Project is dedicated to the beloved Koli fishing community of the city. 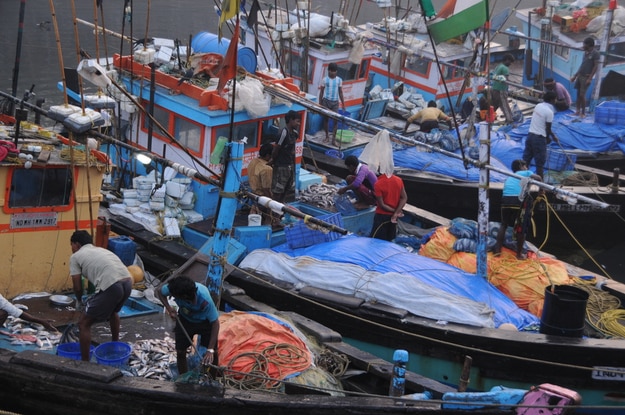 Unidentified Women and men trade in a wide variety of fish at Sassoon Docks in Colaba, South Mumbai

The schizophrenic city of Mumbai has a lot of faces for all to see: its glitzy restaurants, hotels and neighborhoods, its riches and its slums. And it has faces that cannot be seen. But the Sassoon Dock Art Project is shining light on one of these faces: that of the lively Koli fishing community. Part of the ongoing St+art Mumbai Festival in the big bad city, the street art project immortalizes the fishermen and the fish markets that are so much a part of Mumbai’s identity, yet so obscure to its residents and guests. ALSO READ: 15 Reasons why Mumbai is the Best City in India Also Read - 'Touching Gesture'! Narayana Murthy Touches The Feet of Ratan Tata And Twitter Can't Stop Hailing The 'Historic Moment'

The indigenous Koli community are among the oldest residents of Mumbai, back when it was just a collection of seven islands. The larger urban art festival is spread across multiple locations, including Mahim, Jindal Mansion and Churchgate Station. The station’s project ended in October, but the Sassoon Docks Art Project will go on until December 30, 2017. Located at an unused warehouse of the 142-year-old docks, the project is dedicated to its natives and its thriving markets. Also Read - JNU Violence Highlights: Student Protests Emerge Across Delhi, Mumbai, Kolkata; Film Fraternity Joins in

The project has exhibits by international and local artists and is the brainchild of the St+art India Foundation. One of these exhibits, titled ‘Idea of Smell’ by the foundation’s creative director Hanif Kureshi, even plays on the distinct and strong odor of fish prevalent in the docks. Another exhibit by Australian artist Guido van Helten is a tribute to the Koli fisherwomen he first met when he visited the docks. His work is a collection of murals covering three walls of the room, all focused on the women with whom he spent several days. The murals are a permanent exhibit, a beautiful monument to the docks and the community. NOW READ: Festivals and Events in India in December 2017 to End the Year on a High Note Also Read - PMC Scam: With Rs 90 Lakh Stuck in Beleaguered Bank, ex-Jet Airways Staffer Dies of Cardiac Arrest After Attending Protest

Artists from Spain, Austria, Mexico, France and Singapore have also taken part. Of the 29 works of art on display at the Sassoon Dock Art Project, 11 are by international artists. The project has been set up in the abandoned MbPT building, and is a must-visit for those looking to get closer to a side of Mumbai not really seen or remembered by many. It also addresses changes to the environment of Mumbai, and how it has affected the city. Just remember to carry your handkerchief when you come here.