What’s Cheaper – Booking All Tickets or a Chartered Flight? Jakarta-Based Man Who Booked Entire Flight to Avoid COVID-19 Has The Answer

A Jakarta-based man named Richard Muljadi booked an entire flight for himself and his wife to avoid contracting COVID-19 causing virus. He tell you if booking all seats in a flight or chartering a plane is cheaper.

While many people are not following social distancing norms during the pandemic, others are going to a whole new level to adhere to these rules. In a recent incident, a Jakarta-based man named Richard Muljadi booked an entire flight for himself and his wife to avoid contracting COVID-19 causing virus. This socialist from Indonesia became viral after announcing this incident on social media. Also Read - All-women Air India Pilot Team to Fly First Non-stop San Francisco-Bengaluru Flight Today

Muljadi is known among his followers for living an extravagant life. Probably, that’s why he could afford these many tickets. He took to his Instagram account to share a few pictures of an empty flight. Only he and his wife were in it. He captioned the image, “After I’d book as many seats as possible it was still cheaper than chattering a PJ. That’s the trick fellas, #LifeHacks” Also Read - Vistara Offers Flight Tickets Starting From Rs 1,299 | Booking, Route And Other Details Here 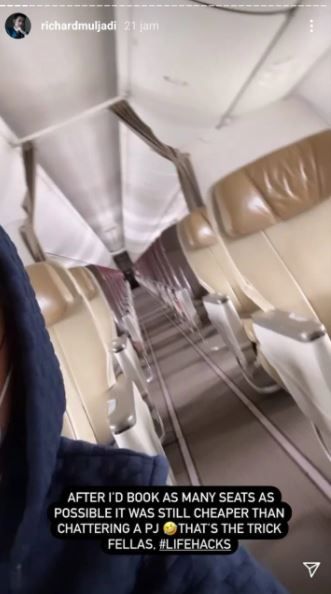 According to Richard Muljadi, who travelled on an empty flight from Jakarta to Bali to ensure safety, booking most of the seats in a flight is cheaper than booking a charter plane. However, he did not reveal the amount he spent to do that. Also Read - Vande Bharat Mission Phase 9: Over 1400 Flights From 24 Countries to Repatriate 2.8 Lakh Passengers

To know if Muljadi’s claim holds any truth, a leading website talked to industry insiders and revealed that the flight Richard Muljadi took is a Boeing 737 Batik Air flight that has a maximum of 189 seats. For travelling from Jakarta to Bali, a single seat on this flight costs around Rs 3000. This means, to book the entire seats in that flight, the man must have spent approximately Rs 5 lakh. However, to charter a plane, you need to spend around Rs 5 lakh per hour in India.

A similar incident happened during the initial days of the pandemic. A man named Jagdeesh Arora chartered an Airbus A320 for his 4 family members so that they reach Delhi from Bhopal safely. The man owns Som Distilleries and he booked the aircraft in Delhi for over an hour.